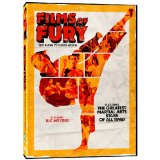 “The man of virtue is invincible.”  –  Wong Fei-Hung

This is a reference to the eternal struggle between good and evil. It is war on an extremely personal level. Hand-to-hand warfare is best shown in intensely emotional films dealing with Asian martial arts. They are full of discipline and morality. Ric Meyers wrote a book that he has turned into a movie, and it is a thorough and passionate work.

The film is an attempt to understand how Americans slowly warmed to the Kung Fu phenomenon. It is fairly detailed in listing the key historical moments in worldwide appreciation of these films. For the uninitiated, the three names that most people will know are Bruce Lee, Jackie Chan and Jet Li. Some other names that the average person might be aware of are directors John Woo and Ang Lee. Past that it is hard to start wading through the alien world, but there are legions of fans who do care.

Films of Fury starts the history of martial arts films with a Chinese connection. It doesn’t deal with the Japanese Samurai films at all. Much of the roots of Kung Fu seem to have been incorporated into the Peking Opera performances which seemed to have created the visual style of Kung Fu films. Clearly there is a long history about Japanese- Chinese relations that we won’t even begin to address here. We will simply ignore the Japanese traditions, because that is what Ric Myers has done. This film focuses on the history that true aficionados will be the only ones to recognize. Some of the early titles are unknown to most such as The Magnificent Butcher, The Magic Blade, A Touch of Zen, The Naval Commandos, Five Element Ninjas and One-Armed Swordsman. I can mention names like King Hu or Chang Cheh, but it means very little to the average moviegoer. A name that Myers does not mention in the movie is the Shaw brothers, and they are the distributors whose name is on all these early films. One can only guess what creative input they had, but it probably centered on budgetary concerns. The visual style that we associate with these films is generally cheesy and quaint from the modern perspective. It is a style many came to love, like Quentin Tarentino, who was heavily influenced by these Chinese films.

Most American audiences probably first took notice with two television series, The Green Hornet and Kung Fu. Bruce Lee had been knocking around as a guest star on shows like Ironside and Longstreet and movies like Marlowe, when he got the part of the sidekick Kato on The Green Hornet. The series was short-lived but fondly remembered when the show Kung Fu was being developed. Conceived with Bruce Lee in mind, studio executive eventually decided on a Caucasian actor, David Carradine, and the rest is history. Most people did not think Carradine ever showed any real martial arts skill. Probably the best examples of martial arts in Western films up to that time were the James Bond movies. So Bruce went to China where he became an international superstar. Bruce Lee is a giant in the industry and martial arts films’ most iconic figure. He is also a legend because of his untimely death making him a rival of James Dean as an immortal image frozen in time. His visual style has been hugely influential to films everywhere from Hollywood to Hong Kong. Steve McQueen and James Coburn where two of his pallbearers. His film Fist of Fury inspired the title of the film I’m reviewing now.

Jackie Chan became the next big superstar by mixing comedy and outrageous stunts in martial arts films. Jackie is as much of a legend as Bruce by surviving incredible real life stunts, time and time again.

Films of Fury goes on to detail contributions by Jet Li, Michelle Yeoh, Cynthia Rothrock, Chuck Norris and the widespread acceptance of films like The Matrix, Kung Fu Hustle and Kung Fu Panda. The tradition is fully incorporated into our collected memories, and if you want to see how it all began, this is a good place to start. I’ll just warn you that the silly animation here is certainly not up to the level of Kung Fu Panda. If you can get through that, there is a lot here to appreciate.