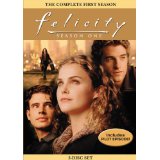 When people think of super-producer J.J. Abrams and his television projects, images from Alias, Fringe and a little show called Lost probably spring to mind. On the other hand, a significantly smaller portion of the TV-watching population may think of the relationship dramedies Abrams has produced, such as What About Brian, Six Degrees and Felicity, by far the best of this latter group. (Then again, Felicity — co-created by Abrams and Matt Reeves — resorted to time travel towards the end of its run, so it probably has more in common with the producer’s genre shows than you think.)

Anyway, we’re here to talk about season 1. Felicity Porter (Keri Russell, in her star-making performance) is a smart, responsible California teen who suddenly decides to follow high school crush Ben Covington (Scott Speedman) to college at the fictional University of New York, despite the fact that Ben barely seemed to be aware of her existence prior to a brief exchange at their graduation. Season 1 follows Felicity throughout her freshman year as she tries to establish her independence.

At least, that’s what it’s supposed to be about. Most of the time is actually spent watching Felicity ping pong between Ben and nice-guy resident advisor Noel (Scott Foley). Although the latter third of the season drags quite a bit — Felicity and Noel spend a solid four or five episodes trying to figure out if they can be “just friends” — the first portion has excellent narrative momentum. By the end of the pilot, Noel had already confessed to Felicity that he had feelings for her, and Felicity admitted to Ben that she had followed him to New York. (I can easily see other shows dragging out each of those story lines for at least half a season.) In fact, if YouTube had been around when Felicity was on the air, I’m almost certain someone would’ve re-edited footage from the show to make Felicity look like a psychotic stalker.

There’s no way around it: Felicity Porter was absolutely infuriating. Of course, you can’t expect a teenager to have everything about her life figured out. The reason people didn’t turn the channel en masse is because of Russell, who’s got a great expressive face and even greater more expressive hair. Her warm performance was the biggest reason we cared about what happened to Felicity. It also helped that Felicity’s love triangle with Ben and Noel was fully formed. Speedman brought more depth than you’d expect to his damaged, soulful lunkhead, while Foley was immensely appealing and radiated great wit as the less-studly guy who occasionally gets stuck in the friend zone. I also liked bit players like Amanda Foreman (balancing out the sweetness as Felicity’s goth roommate Meghan) and Robert Patrick Benedict (as resident pest Richard) more than full-time supporting characters like Julie (the drippy friend played by Amy Jo Johnson) or Elena (Tangi Miller as Felicity’s classmate who constantly has a chip on her shoulder).

Besides the pilot, I tended to enjoy themed episodes like “Spooked”, the Halloween ep that introduced funny supporting actors Ian Gomez (Cougar Town) and J.J. Abrams regular Greg Grunberg (Heroes), and “Thanksgiving”, which introduced future Alias leading lady Jennifer Garner. I also liked the two-part “Todd Mulcahy” because it turned the stalking tables on Felicity. I was less impressed when the show veered close to after school special territory, like the two-part “Drawing the Line”, which dealt with a supporting character’s rape or the arc where Ben developed a bit of a gambling addiction. (At least “Drawing the Line” was done with subtlety.)

Unfortunately, the worst part of every episode is the clunky “Dear Sally” device where Felicity expresses her thoughts into a tape recorder that she sends to a former tutor (voiced by Janeane Garofalo). It’s really just a reason to have Felicity narrate every episode, and a lazy way to give us access to the character’s thoughts and emotions. I wish they’d ditched it after the pilot.

The season concludes with a cliffhanger that must have driven fans nuts over the summer when it was on the air: did Felicity spend part of her vacation with Noel in Berlin or driving cross country with Ben? Although the show had some bumps along the way (just like any other freshman in college) Russell, Abrams and Co. — along with fellow bold-name producers Ron Howard and Brian Grazer — made us care about the answer to the question.

Felicity – Season 1 is presented in an aspect ratio of 1.33:1. Simply put, this is one of the worst video transfers I have ever seen. The 22-episode set ambitiously tries to cram eight episodes into Discs 1 and 2, and the strain unfortunately shows. Forget DVD — there were parts of the pilot and the rest of season 1 that would’ve looked crummy if I were playing them on a VCR. Things get slightly better in Disc 3, but overall the color, contrast, black levels…everything is simply horrible. (Other than that, I really liked it.)

The Dolby Digital 2.0 Stereo track delivers dialogue adequately and gives you a surprising amount of ambient city noise. However, the main issue (as was the case with previous Felicity DVD releases) is that some of the songs from the show’s original broadcast have been replaced by tracks from lesser-known artists to save on rights fees. This isn’t a big deal on a lot of programs — and if you didn’t watch the show when it was originally on, you may not always notice — but Felicity has some pretty noticeably music cues and slo-motion montages to close out episodes that become a bit awkward without the original music.

Though Felicity is undeniably dated — it’s funny to see relatively contemporary young people in college talking on landlines and pay phones all the time — the show still holds up as an effective dramedy and an honest portrait of impending adulthood. I just wish the show could get a proper home video release because this one has absolutely nothing new to offer. Bad audio, worse video, no special features. It doesn’t even have alternate audio tracks or subtitles!

Although it’s available at a really good price — between $10-$20 on Amazon — and it’ll definitely spare you some space on your movie shelf, there’s no way I can recommend this DVD set of Felicity. Save your money and wait for a proper release.