Exclusive Interview With Tom Caltabiano, Director Of 95 Miles To Go 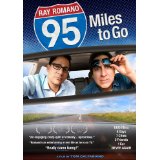 On Friday I had a chance to chat with Tom Caltabiano. If you’re a fan of the hit series Everybody Loves Raymond or the stand-up of the show’s star Ray Romano, you should already know who Tom is. He’s been Ray’s buddy, touring partner, show writer and opening act since 1991. His intimate documentary of one of those tours is the subject of the new recently released 95 Miles To Go on DVD. Tom talks about the release and his time with Ray on the road.

Bang it here to listen to my chat with Tom C. Podcast

Gino Sassani is a member of the Southeastern Film Critic's Association (SEFCA). He is a film and television critic based in Tampa, Florida. He's also the Senior Editor here at Upcomingdiscs. Gino started reviewing films in the early 1990's as a segment of his local television show Focus. He's an award-winning recording artist for Omega Records. Gino is currently working on his 8th album Merchants & Mercenaries. Gino took over Upcomingdiscs Dec 1, 2008. He works out of a home theater he calls The Reel World. Favorite films: The Godfather, The Godfather Part II, The Body Snatcher (Val Lewton film with Karloff and Lugosi, not the pod people film), Unforgiven, Gladiator, The Lion King, Jaws, Son Of Frankenstein, The Good, The Bad And The Ugly, and Monsters, Inc.
Battleship Haywire (Blu-ray)