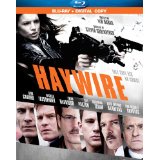 At first glance Haywire appears a bit out of character for the likes of director Steven Soderbergh. It’s not that he hasn’t delivered action films in the past. It’s that he’s never quite tied himself to such a tried and sometimes true formula before. When you first look at the press for Haywire you’re going to pretty much dismiss it as a standard action-hero film that follows in the mold of a Steven Seagal/Chuck Norris mold with a touch of Bourne Identity thrown in to meet the more recent trends. If that’s what you think, then you’ve pretty much called it, because that’s exactly what it is. But that’s not a good reason to dismiss the film either.

I won’t lie. The film pretty much follows the path you expect it to follow. Mallory (Carano) stumbles into a bar in an isolated town where she’s meeting with a contact. But she’s wary because something has gone wrong and she’s not sure exactly who she can trust. She’s right. No surprise there, is there? She takes Scott (Angarano) hostage for his wheels and makes her getaway. During their flight she begins to tell him the story of how she got to where she is. It’s through this narrative that the story unfolds for us. This is where Soderbergh offers up a little of his own tweaks to the story and, for the most part, there’s enough of his wit here to keep the narrative humming along. Of course, she’s out to find the guys who tried to get her killed, and there’s a ton of carnage in the wake.

The film is obviously intended as a vehicle to launch Gina Carano into her own action film career and possible franchise. Carano is a martial arts champion, so expect a ton of roundhouse kicks and fighting. She’s as convincing as Norris or Seagal and a little bit better to look at. OK, she’s a lot better to look at. She has some acting chops and manages to carry the film fairly well. But Soderbergh wasn’t going to put her out there without a net. We’ve got a powerful supporting cast that includes a strong performance from Michael Douglas. I have to say that the last interview I saw with him made me think he was about ready for the big goodbye. He’s made a miraculous recovery here and looks and acts like he hasn’t had anything more than a cold. It’s one of the best health comebacks in Hollywood history. You can’t help but pull for the guy, and he delivers here. The supporting cast also includes Antonio Banderas, Ewan McGregor, and Channing Tatum.

Haywire is presented in its original aspect ratio of 2.40:1. The 1080p image is arrived at with an AVC MPEG-4 codec at an average 38 mbps. The film uses mostly source lighting, so the high definition image presentation can look a little soft. The upside is that you get a more realistic look. It’s a style that relies on the detail to shine through even in low light situations. Fortunately, this is the kind of thing Blu-ray does pretty well. With such a solid bit rate you get that detail. It also means pretty good black levels.

The DTS-HD Master Audio 5.1 is a very stylistic audio presentation. There are moments where there is no score. It’s actually a welcome change. There are also moments that are nothing but a jazz score. In these scenes the dialog is completely muted, if it’s even a dialog piece. Here the music adds another fresh element. The music comes through with a nice dynamic edge and the juxtaposition of these styles keeps the audio elements interesting. When you are intended to hear dialog it’s clear and positioned perfectly. When the ear candy is called for during the fights you get enough to immerse you in those particular scenes.

Gina Carano In Training: (16:03) HD The piece covers her fighting career and then moves to her specific training for the movie. There’s plenty of weapons boot camp and fight choreography here.

The Men Of Haywire: (5:29) HD The guys get a few minutes each to offer their thoughts. While he’s pictured on the segway graphics, there is nothing on Michael Douglas here.

It’s a fine enough action film until we get to the end. I have to say the last frame left me as unsatisfied as the last frame of The Sopranos. It kind of just ends. Yes, we know what’s going to happen, but this is an action crowd. You’re really going to want to see it, and Soderbergh’s really not going to show it. It’s going to make a lot of ticket-buyers angry. It did at the screening I was at, and no one paid to get into that one.  “You’ve got the macho takedown, but where’s the due diligence?”

Gino Sassani is a member of the Southeastern Film Critic's Association (SEFCA). He is a film and television critic based in Tampa, Florida. He's also the Senior Editor here at Upcomingdiscs. Gino started reviewing films in the early 1990's as a segment of his local television show Focus. He's an award-winning recording artist for Omega Records. Gino is currently working on his 8th album Merchants & Mercenaries. Gino took over Upcomingdiscs Dec 1, 2008. He works out of a home theater he calls The Reel World. Favorite films: The Godfather, The Godfather Part II, The Body Snatcher (Val Lewton film with Karloff and Lugosi, not the pod people film), Unforgiven, Gladiator, The Lion King, Jaws, Son Of Frankenstein, The Good, The Bad And The Ugly, and Monsters, Inc.
Exclusive Interview With Tom Caltabiano, Director Of 95 Miles To Go Dark Blue: The Complete Second Season