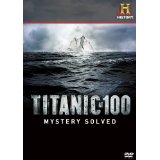 When the History channel isn’t busy churning out reality shows, they manage to indulge the history enthusiasts with a fresh new documentary to tide us over.  Granted I’m an obsessed fan of Swamp People and Brad Meltzer’s: Decoded, but what gets me most excited is when they bring out a new documentary.  (I’m a history geek in case you haven’t figured it out.) So when I got the chance to check out Titanic at 100: Mystery Solved, I happily put this in my DVD player.

After the success of James Cameron’s Titanic the world was flooded with several TV movies and documentaries that told the story of what happened the morning of April 15th 1912 in the Atlantic, so I will spare you the details.

What makes this documentary set itself apart from the pack is the approach taken by the research team to solve the mysteries that have plagued people over the course of the past 100 years.  And to solve this mystery these researchers are using more high tech equipment than ever before.  The new technology being brought in to investigate the dive site are two HD cameras that shoot both 2D and 3D as well as two AUV’s (autonomous underwater vehicles) that will be used to map out 15 square miles of the entire debris site.  What does this mean to the viewer?  Well it means we get to see stunning HD footage of the wreck like never before, not just the famous shot of the bow of the ship but footage of all the remains spread across the ocean floor.

The research team is plunging into the depths to discover if the Titanic had a design flaw and to understand what caused the ship to break up as it did.  To do this they need to examine all the parts, but as they are surveying the wreck the research vessel has two major hurricanes that are barreling towards them.  While bringing in the cameras there is a nerve-racking moment as one of tethers to ROV cameras gets snagged on a piece of the Titanic.  They run the risk of damaging the ship or losing equipment that is valued in the millions, but with some good piloting from a guy on the research vessel he is able to free the tether with enough time for them to escape the storm.

Later once all the footage is collected they are able to recreate a full 3D model of the wreckage and piece it all together.  As this portion plays out we are shown a mixture of photos of what the areas looked like on the Titanic, to what it looks like 2.5 miles beneath the surface, and then pieced together for the 3D model.  This sequence helps reveal just how devastating the sinking truly was and how the impact from hitting the ocean bottom left the once majestic ship in shambles.

To help remind us that this is more than just about the sinking of a ship and about the lives that were also lost that fateful night, the documentary introduces us to passengers aboard the ship, because after all this is a story of human tragedy.

Overall this is well done documentary that is engaging and reminds us that this is truly one of the greatest tragedies that continues to capture our imagination.

Brent Lorentson is a horror writer and film critic based out of Tampa, Florida. With a BA in Digital Film, he co-wrote and co-directed Scavenger Hunt. His short stories have appeared in various horror anthologies. In 2019 his short script Fertile Blood will be a part of the anthology horror film Slumber Party. He is currently working on his first novel A Dark and Secret Place set to be released in late 2019. Favorite Films: Taxi Driver, Fight Club, I Saw the Devil, The Wild Bunch, Dawn of the Dead, A Clockwork Orange, Pulp Fiction, Heathers, The Monster Squad, and High Fidelity.
Life Without Principle A Fool and His Money