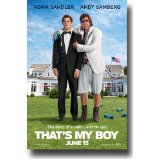 Ever since his departure from Saturday Night Live, Adam Sandler has become one of the most successful comedians of all time.  Granted not all of his movies have been great; in fact, some are better left forgotten, but he has a loyal fan base that will keep returning to the theater to see the funny man with hopes of the next big hit.  Sure, he had success with Grown Ups, but when looking over his films from the past decade I can’t help but wonder what happened.  I’m a big fan of Funny People; it was a more serious role for Sandler, and I appreciate when actors and film makers step outside their comfort zone and try something different.  But in the end the fans still want what got us to love them in the first place.  With That’s My Boy it’s Sandler returning to his roots, and he’s cranked it up.

Joining Sandler is Andy Samberg, who recently left SNL after being a cast member with the show for seven years.  With That’s My Boy being the first release since his recent departure we’ll soon see if he will have a life after the long running sketch series or fade into obscurity like many other cast members that have left the show over the years.  Though there is only a 12-year age difference between Samberg and Sandler, the two play father and son in this crude raunchfest.

The film starts off in 1984, when a young Donny Berger is only 13 and he’s developed a crush on his math teacher Miss McGarricle (Eva Amurri Martino).  One can’t blame Donny for his crush on his teacher; I think all of us guys out there wish she was teaching us fractions or keeping us after for detention.  The first encounter with Donna and Miss McGarricle during after school detention sets the tone for the rest of the film.  Her seduction of the young Donny is sure to upset a few people, but then again those that would be upset by this, well, this isn’t the movie for you.

After Donny and Miss Mcgarricle are caught in the act, she is sent to prison for 30 years though she is pregnant with Donny’s child.  The child will go on to be in Donny’s father’s care till Donny turns 18, where from then on he will take custody of his son Han Solo Berger.  The media is in a frenzy over the story, and Donny becomes a child star after selling his story.

Jumping ahead to present day, Donny (Sandler) is like most child stars of the 80’s, broke and in trouble with the law.  He discovers after not paying his taxes for years and owing the IRS $43,000 that if he doesn’t pay he has to go to prison for the next three years.  With only the weekend to get the money together in time, Donny has to think fast about what to do.  It’s out of desperation he goes to a talk show host where a deal is struck that if Donny can get his son to the women’s prison for a reunion with his mother, the host will gladly hand over a check to Donny.  The only problem is Donny hasn’t seen his son in years, and he hates his father so much he’s changed his name and created a new life of his own.

Han Solo who with his new identity is now known as Todd (Samberg) is about to get married to his beautiful fiancée Jamie (Leighton Meester) up in Cape Cod over Memorial Day weekend.  Todd has worked hard to be successful in his new life working for a tycoon (Tony Orlando).  He’s responsible and boring, everything his father isn’t, and Todd seems content with this.  Jamie’s family is full of the usual stereotypes and still manage to wrangle a few laughs, mainly the horny old grandmother.  But the relationship that’s fun to watch is between Todd and Jamie’s protective brother Chad (Milo Ventimiglia).

After Donny shows up unannounced Todd scrambles to come up with an excuse for who Donny is since he told everyone his parents had died, so Donny dutifully takes on the role as Todd’s long-time best friend.  No matter how foul-mouthed and crude Donny gets, it seems Todd’s soon to be in-laws simply embrace Donny, who seems to have a beer in his hands at all times throughout the entire film or at least have a beer nearby.

Where the film hits its stride is when the boys get to head out and celebrate the bachelor party.  This sequence alone is worth the price of admission.  Here when we have Donny and Todd finally bonding; looking beyond all the debauchery it has its sweetness to it.  Donny after all isn’t a bad guy; he was just an immature father who was too young to have a kid.  It’s the moments with Sandler and Samberg together that do stand out; they have a good chemistry, and they play well off one another.  And the biggest surprise is the appearance of Vanilla Ice, who plays himself and tags along for the latter half of the film.

Sure, there are scenarios throughout that we’ve seen before, but the execution of these still can muster a few laughs.  A masturbation scene with the grandmother’s old photo and a tickle fight between father and son that goes a little too far are only the tip of the iceberg to the crudeness at hand here.  Some of the scenes that got the biggest laughs seem to be the ones that also get the biggest groans because of how far the envelope gets pushed.  Pretty much every body fluid finds a way in this along with numerous sight gags that will keep you laughing or flushed with disbelief.  There are moments where you’ll be surprised and repulsed, and that’s what makes this lowbrow raunchfest the good time that it is.

Brent Lorentson is a horror writer and film critic based out of Tampa, Florida. With a BA in Digital Film, he co-wrote and co-directed Scavenger Hunt. His short stories have appeared in various horror anthologies. In 2019 his short script Fertile Blood will be a part of the anthology horror film Slumber Party. He is currently working on his first novel A Dark and Secret Place set to be released in late 2019. Favorite Films: Taxi Driver, Fight Club, I Saw the Devil, The Wild Bunch, Dawn of the Dead, A Clockwork Orange, Pulp Fiction, Heathers, The Monster Squad, and High Fidelity.
Rock of Ages Celebrate Father’s Day With A Monster Prize Package From A&E/History