Dog the Bounty Hunter: Taking It to the Streets 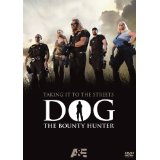 In 2004 DOG the Bounty Hunter first took to the airwaves. On the surface it looked like yet another one of those reality cop shows where camera guys followed the men in blue as they took down the bad guys. Dog wasn’t a cop; in fact he’d spent a part of his life on the other side of the law. Still, he was decked out in a Kevlar vest with a badge hanging from a chain around his neck. The cameras followed him around as he kicked in doors and stalked his criminal prey. But this isn’t really quite your typical reality cop show. These guys aren’t cops. They’re bounty hunters. It’s a family business that provides bail bonds to get the bad guys out of jail and has the muscle to track them down if they decide to skip their court appearances. This Dog doesn’t get stuck holding the bag for nobody.

The Chapman family lives mostly in Hawaii. They do spend a lot of time at a second home in Colorado, where Dog is originally from. But it doesn’t really matter what the location might be. The job is always the same. The team is strictly a family affair. Dog (Duane) Chapman is “Big Daddy” and the driving force behind the operation. Beth is Dog’s wife and runs the business side of the operation. That doesn’t mean that she’s not right there on the hunt offering logistic support. Dog’s right-hand man is his brother Tim. They have been partners for decades. Then there are Dog’s two sons Leland and Duane Lee. This is the core group. They operate out of two SUVs as they track and take down the fugitives. The youngest member of the team is Dog’s daughter Baby Lyssa. She’s a small and shy girl, but she gets in her share of licks every now and again. There is also Dog’s nephew Justin, who has a spotty record of commitment to the group.

Each episode finds the team gathering intel on the person or persons they’re going to be looking for in that particular episode. We get to see them strategize and run their scams and searches to bring the person in. There’s a lot of tough talk, and the subject is often referred to as the scumbag or worse. Things change once the subject is in custody. Chapman develops a soft spot for the person and gives them a little moral talk. Now he’s all soft and kind no matter how hard the fugitive made it for them. He tries to get them to turn their life around. You’ll be amazed at how often these criminals end up crying and hugging the guys that took them down. They often shout “I love you” to the bounty hunter as they’re ushered into jail. It’s all part of the unique nature of the show. Dog begins each hunt with a prayer and the motto: “Let’s catch them and fix them”.

Since the show first came out there really haven’t been a ton of episodes released on DVD. This one appears almost pointless. The episodes do not relate to each other and span different seasons. The Mega-set was some time ago. I’m not sure if Dog’s legal battles have been an issue for the network, but I really can’t figure out any other reason. My sources tell me that the current run of episodes will be the last ones. It’s been a year of troubles for the family and it’s quite possible they no longer wish to air it all on television. For fans of the show “this is going to be a tough one”.

Gino Sassani is a member of the Southeastern Film Critic's Association (SEFCA). He is a film and television critic based in Tampa, Florida. He's also the Senior Editor here at Upcomingdiscs. Gino started reviewing films in the early 1990's as a segment of his local television show Focus. He's an award-winning recording artist for Omega Records. Gino is currently working on his 8th album Merchants & Mercenaries. Gino took over Upcomingdiscs Dec 1, 2008. He works out of a home theater he calls The Reel World. Favorite films: The Godfather, The Godfather Part II, The Body Snatcher (Val Lewton film with Karloff and Lugosi, not the pod people film), Unforgiven, Gladiator, The Lion King, Jaws, Son Of Frankenstein, The Good, The Bad And The Ugly, and Monsters, Inc.
Exit Humanity Wrath of the Titans (Blu-ray)