Wrath of the Titans (Blu-ray) 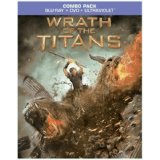 “In ancient times the world was ruled by gods and monsters…And now the time of the gods is ending.”

It appears that Greek mythology has become the fodder for a ton of movies of late. From young adult films to the hardcore action movies, audiences are getting their fill of the familiar gods and beasts from mythology lore. Some are calling it a trend or hot phase, like vampires and robots. Whatever it is, it isn’t a phase, and it isn’t merely passing through.

From the time I first learned how to read I became enthralled by the wonderful stories in mythology. It was easy to imagine these mythical creatures in all of their glory. I was born on the Summer Solstice, so the story of Perseus and Andromeda always held a special fascination for me, at least as romance stories went, and these tales have enriched my life ever since.

“You’ve got to control your fear.”

I was also a very young fan of the cinema. Movies were the great escape. Just like the elements of the myths that fed my early reading days, the silver screen continued to nourish that imagination. I was particularly drawn to the works of Ray Harryhausen and his stop-motion technique. I was lucky enough to befriend the man in later life, and I still enjoy those “dated” films today. In 1981 my two fantasy worlds collided with Clash Of The Titans. There on the big screen stood my favorite myth told by my favorite filmmaker. I would be happy to tell you how many times I saw that movie, but I was never good with numbers that high. It would become bittersweet because it was to be Harryhausen’s final film. And while very much alive in the years since then, Ray has not done another film since. The movie wasn’t perfect, but for a short time the universe appeared to be indulging me, if only for a moment.

Imagine my surprise when that film became the latest remake/reboot/reimagining/rehash project in 2010. I have to admit I had mixed feelings, but I was there soon after the film opened, eager to see what the age of computer generated images could do with my favorite tale. I was devastated. The film was horrible, and to this day I’ve only seen it the one time. Director Louis Leterrier obviously didn’t understood what even I understood as a young boy. The f/x were spectacular at times, but the film itself was lifeless. Leterrier treated his characters like Monopoly tokens, useful only to get the story from one effect to another. He abandoned the actual story along with all of the magic and charm. However, the film made over a half billion in international box office and was headed toward a sequel no matter what I might have thought of it. Needless to say, I was underwhelmed by the project. But then I saw this movie.

Leterrier has been replaced by Jonathan Liebesman, who must have grown up loving the same stories I did.

The film picks up where the last left off. Perseus (Worthington) has abandoned his father Zeus (Neeson) and a chance to live among the gods. His wife is dead, and he’s left to try to raise his son alone. Still, he’s content with his life until he’s paid a visit by Zeus once again. It appears that the gods are loosing their power. Mankind no longer prays to them, and the time of the gods is nearing its end. But this loss of power has consequences. Someone is trying to release Chronos, the father of the Olympian gods who tried to kill them. His release will mean destruction, and the gods aren’t powerful enough to stop him. His plea to Perseus falls on deaf ears, but circumstances intervene, and soon Perseus is on a new quest with Andromeda (finally) (Pike) and the son of Poseidon, eager to show his worth. Hades (Fiennes) and Ares (Ramirez) have captured Zeus and will give his power to Chronos. Only Perseus can save the world once again.

Liebesman creates a true epic myth here. He focuses on his characters and allows this natural talent to dominate the story. No longer mere pawns, the outstanding cast adds true pathos and drama to the story. The effects are far more impressive, more so because they are the spice to a story that can survive without them. Sam Worthington is almost a different character. There’s an emotional edge that was completely lacking in the first film. A wonderful surprise comes in the short appearance by Bill Nighy as Hephaestus, the designer of the gods’ weapons and Perseus’s guide to the Underworld. He supplies some much needed exposition, and with a flair. The film literally brightens when he appears. He also appears to speak for the audience when he dismisses the events of the last film as “blah blah blah”. He’s the best character in the film. There is also a very sweet nod to the original Clash Of The Titans with the appearance of the mechanical owl from that film.

For those of you who want to know about the creatures, there are some impressive ones here. Pegasus returns, of course. Overall, these creatures appear to be more a part of the story. They appear more natural, and the transition with the actual photography is quite seamless. The 3D isn’t gimmicky and it merely adds depth to the story. I’m sure it will work just as well if you happen to catch it only in 2D. I expect the IMAX treatment will be pretty sweet, but we weren’t shown the film in that format for the screening.

Wrath Of The Titans is presented in its original aspect ratio of 1.85:1. The 1080p image is arrived at with an AVC MPEG-4 codec at an average 27 mbps. You’re going to really like this high-definition image presentation. The film is often shrouded in ash and dust or even a misty atmosphere. The presentation really cuts through those intentional issues and manages to give us clarity without losing the atmosphere of the film itself. It was originally 3D, and much of those elements are meant for that kind of presentation. You don’t lose anything here at all. Black levels are deep. Contrast is the real winner here. You have wonderful moments of fire and bright lava against dark backgrounds. The choices work quite well here. Detail and sharpness won’t disappoint even the most picky viewers. The computer-generated images all look wonderful and blend seamlessly into the live action.

The DTS-HD Master Audio 5.1 is nearly as impressive. The first thing you notice is how deep and rich the subs are here. There are plenty of explosions and roars, not to mention the voice of Chronos the Titan here. It’s a busy mix with plenty of immersive surrounds. This is particularly noteworthy in the labyrinth. The sound design puts you right inside the maze. There is subtle as well as booming surrounds to contend with. The score is often rousing without interfering, and dialog is right there most of the time.

Maximum Movie Mode: You get two choices of interactive viewing here. You can choose the God’s Path or that of Man. Each delivers its own set of behind-the-scenes features during your viewing experience. Personally, I’m glad to have the Focus Points option that allows you to see these features outside of the film.

Everything that went wrong with the last film is done right here. The movie is entertaining and a rare instance where it is without a doubt superior to the film before it. This is what I was hoping the last one might have been. If you’re like me, there is no need to hope any longer. Wrath Of The Titans lives up to the name and offers promise for a future with the franchise. Perhaps I was a little premature in 2010 when I suggested “the time of the gods is near an end.”

Gino Sassani is a member of the Southeastern Film Critic's Association (SEFCA). He is a film and television critic based in Tampa, Florida. He's also the Senior Editor here at Upcomingdiscs. Gino started reviewing films in the early 1990's as a segment of his local television show Focus. He's an award-winning recording artist for Omega Records. Gino is currently working on his 8th album Merchants & Mercenaries. Gino took over Upcomingdiscs Dec 1, 2008. He works out of a home theater he calls The Reel World. Favorite films: The Godfather, The Godfather Part II, The Body Snatcher (Val Lewton film with Karloff and Lugosi, not the pod people film), Unforgiven, Gladiator, The Lion King, Jaws, Son Of Frankenstein, The Good, The Bad And The Ugly, and Monsters, Inc.
Dog the Bounty Hunter: Taking It to the Streets The Jerk Theory