Posted in: No Huddle by Archive Authors on July 3rd, 2012 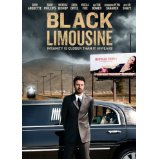 The opening scene of Black Limousine is highly dramatic and highly deceptive. We open on a space station beginning to explode and disintegrate in orbit as a female astronaut tries to revive a seemingly dead male crew member. The music swells as the explosions beginning to trigger and expand. The credits roll. We see David Arquette sitting in a crowded theater watching the screen. He then lingers outside the theater looking at a movie poster and trailing his fingers across the words “Music by Jack McKenzie”. His fingers snap away and he walks off morosely. That is a very effective way to introduce the story and the character. He was a big shot, and yet his car is vaguely shabby with a small dent on the side door.

The next scene is his interview at the limousine service, which mentions that he was involved in a fatal accident that was another driver’s fault. Clearly this a man who needs to get his life back on track. He’s got a daughter that he shares custody for as he tries to regain the talent and notoriety he had before.

Then things get a little weird when the black janitor at the limo service tells Jack that the limo driver before him sliced up and murdered people in the back of the limo. The janitor even has bloody pictures.

Jack goes to support meetings. He seems like a nice guy who is sincere and likeable, but we don’t know very much more about him so far. He meets a movie star at a support meeting and tries to make small talk but gets nowhere. He’s not a big shot. He’s a schlub who lives in a dreary LA walk apartment. But he’s smart and still has his dreams. Whatever knocked him down won’t get him down forever.

The cool thing about being a limo driver in LA is that you are likely to meet rich and famous people, and sure enough a rich and famous person recognizes him and they become friends as Jack drives him around to various destinations. At one of his destinations, he gets to imagine his movie star rehab acquaintance in a music video in his mind.

Back at the rehab, we see the music video/vodka poster girl telling the hard reality of his life, which is that she’s broke living the dream of someday being rich and famous. She’s on a big poster, but it’s all a lie.

There are so many stories about the sad lives behind the dream factory like Sunset Boulevard, The Day of the Locust, The Player, Modern Romance, Mulholland Falls, and Barton Fink. This contemporary  tale is not quite in that  league but would be flattered by the comparison. Black Limousine is a low-budget film with big dreams and grand ambitions. Slowly the film is going to have to reveal what’s behind the tantalizing bits of information we have received. How was one of his daughters killed? How will the murders that took place in the limousine come into play in the story? What about the skull-faced drummer of a rock band who kidnaps him?

Music plays a big part in the film since Jack as a composer is always hearing his music, which adds a dreamlike quality to everything that he does. In fact, very often we don’t know if he’s living in a hallucination or a dream, since it’s very obvious that he slips in and out of reality from time to time.

Finally things start to accelerate and Jack becomes clearly unhinged. What part of his life is real, and does he even know if some parts are insane?

In the end, we don’t quite know what has happened. It’s one of those movies that will leave you frustrated by not answering the questions. Many films that are great art leave you scratching your head and wondering what it all means. This film is not great art, but it would be flattered to be compared to films that are.