Posted in: Disc Reviews by Gino Sassani on July 3rd, 2012 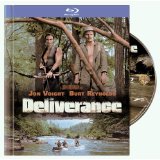 It’s one of those lines that you know even if you’ve never seen Deliverance. The line and film have entered our pop culture and have been referenced in hundreds of films that followed. Along with the iconic rendition of Dueling Banjos, taken from the traditional piece Feuding Banjos, well… you might feel like you’ve seen the film even if you haven’t. Deliverance is a film about Americana that has itself become a large part of Americana. Most of us have found ourselves in a situation where we start hearing those familiar notes in the back of our heads. The truth is, they just don’t make them like this anymore.

The Calhulawassee River is about to disappear. A dam project is going to flood an entire valley and turn the historic river into a rather large lake. The news inspires Atlanta city-slicker Lewis (Reynolds) to talk his friends into a canoe trip down the isolated river before it disappears forever. The Atlanta foursome head out into the wilderness for a weekend of adventure and bonding. They have no idea what it is they’re really in for.

The group also includes Bobby (Beatty), the soft innocent of the group. There’s Drew (Cox), the fun-loving/guitar-playing cowboy in the group. Ed (Voight) is the serious and quiet member of the team. While Lewis boasts of his macho abilities, none of them have ever attempted to conquer the wilderness like this before. Of course, it’s not Mother Nature that becomes their enemy, but rather human nature. When Bobby and Drew come upon a couple of “good ol’ boys” things turn nasty. Drew is tied to a tree by the neck with his own belt while Bobby is sexually molested by one of the hillbillies. When Lewis comes upon the scene he kills one of the attackers and runs the other away. They decide to bury the dead man and pretend none of this ever happened. Now they must try to get out of the river with the second man potentially stalking them. The resulting violence and emotional tragedy will leave them scarred for life; that is, if they can get out with their lives.

Deliverance was based on a first novel by poet James Dickey. The writer found himself a bit of a Hollywood celebrity for a while and was a part of the film set until he was kicked out by director John Boorman. Just look at the material and it’s a safe bet that Dickey had some powerful things to say, and it’s no wonder he felt very much a part of the material. But his relationship with the actors and director deteriorated to the point where Reynolds admits to wanting to slug the writer, who refused to stop calling him by his character’s name.  It was a breakthrough work for Dickey. The same can be said for the four primary cast members.

For Ned Beatty and Ronny Cox, it was their first time in front of a camera. Both had worked together on the stage, and the film has certainly launched very sweet careers for both actors. For Reynolds it was a chance to break out of television, and he made the best of it. The 1970’s ended up being very good for him. John Voight was the established actor in the group, having already achieved success with such hits as Catch 22 and Midnight Cowboy. Still, even Jon Voight considers the film a turning point in both his life and career. After 40 years it’s something to see all four of these accomplished thespians looking a lot younger than most of us think of them today.

The real star of the film isn’t really any of the cast members at all. John Boorman made phenomenal use of the Georgia wilderness when he took his cast and crew onto the real waters of the Chattooga River. The film was also shot sequentially, something you rarely find in a movie today. It likely helped to keep the characters into the various emotional changes that they go through on the film. The cast and crew would take canoes and a rubber boat down legs of the river, filming the movie as they went along. There would have been very little chance for pick-up shots later on in the shoot. The actors had to live the journey as they filmed. Each of them credit this guerilla-style shooting method for the performances they gave. The crew was necessarily small, and there were no stunt men. The actors performed all of the cliff-climbing and white-water thrills and spills. Between the beautiful and isolated locations and the actor’s throwing themselves into the part the movie is all the more stunning for its realism.

Even with the vast wilderness that encompasses the film, it’s really quite an intimate film at its core. The chemistry between these characters is really what drives the entire production. It’s hard to imagine anyone else in any of these parts. The fact that these young actors had illustrious careers without being at all pigeonholed into this kind of material or role is a bit miraculous. If you’re a fan of nuanced acting, this is the kind of film you can watch over and over again. This 40th Anniversary Blu-ray release is just the thing to make that possible.

Deliverance is presented in its original aspect ratio of 2.40:1. The 1080p image is arrived at with a VC-1 codec at an average of about 30 mbps. The image is 40 years old, and this presentation is identical to the previous Blu-ray release. It’s not perfect. There are some print artifacts that convince me the movie is long overdue for a 4K restoration. Still, the image does deliver the detail and is faithful to the original movie experience. Boorman intentionally washed out some of the color for effect. So colors aren’t going to jump off the screen. There’s plenty of grain, but it never takes away from the film’s quality. Rather, the grain element adds wonderful texture to this classic. It would have been a big mistake to clean the picture too much. I don’t want to see DNR ruin the material, and I’m so happy no one decided to enhance the colors. The best word I could use to describe the image presentation is authentic.

The DTS-HD Master Audio 5.1 does not really do a lot of justice to the film. Here’s where I would have welcomed a modern upgrade. The audio is often harsh. This is before surround sound, so you can’t really call it immersive at all. Dialog is fine, and the music is actually particularly clear. The movement sounds of the river were brilliant in their day but just fall flat now.

There is an Audio Commentary by director John Boorman. It’s a very scene-specific commentary with plenty of dead air.

The Cast Remembers: (29:52) This is the only HD extra. It’s also the only one not from the previous release. The cast gather at the Burt Reynolds Museum in Florida to talk about their experiences on the film. It’s recent and the most interesting piece here.

The rest of the stuff is ported over.

Whatever you think you remember from this movie, I promise you that you’ve missed something. There is such a lot going on in the background here that it takes several viewings to truly take it all in. There’s a ton of symbolism and commentary on modern life that appears to still apply 40 years later. Once you start to really dig up what’s there, you’re going to surprise yourself about what you missed. “It’s there all right. You get in there and can’t get out, you gonna wish it wasn’t.”

Gino Sassani is a member of the Southeastern Film Critic's Association (SEFCA). He is a film and television critic based in Tampa, Florida. He's also the Senior Editor here at Upcomingdiscs. Gino started reviewing films in the early 1990's as a segment of his local television show Focus. He's an award-winning recording artist for Omega Records. Gino is currently working on his 8th album Merchants & Mercenaries. Gino took over Upcomingdiscs Dec 1, 2008. He works out of a home theater he calls The Reel World. Favorite films: The Godfather, The Godfather Part II, The Body Snatcher (Val Lewton film with Karloff and Lugosi, not the pod people film), Unforgiven, Gladiator, The Lion King, Jaws, Son Of Frankenstein, The Good, The Bad And The Ugly, and Monsters, Inc.
Black Limousine American Independence Week Contest # 5 Titanic: The Complete Story On DVD From A&E/History