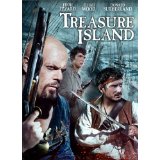 “Loyalty is what you can hold in your hand.”

I know it doesn’t completely fill the bill as a pirate film, but ever since I saw The Goonies up on the big screen I became obsessed with all things pirate related.  Even one of the first books I read as a child was the Robert Louis Stevenson classic Treasure Island.  The bad part with being an 80’s kid was growing up in an era where pirate films simply were hard to come by, and when they did they weren’t very good; I’m looking at you Cutthroat Island.  I think most of us can agree it wasn’t until Pirates of the Caribbean came along that we pirate fans finally got the movie we had been waiting a long time for.

When I first heard there would be a made for TV mini-series of Treasure Island I have to admit I wasn’t all that excited about it, and when I saw the trailers on SYFY channel I shrugged it off.  Well, here is the thing, I’m glad I didn’t watch it on TV with all the commercial interruptions and having to wait to watch Part 2 the next day or week later, because that is an injustice to this film.  This is meant to be seen as a whole without loud obnoxious car commercials cutting in to ruin the experience.  What director Steve Barron (Teenage Mutant Ninja Turtles) managed to pull off here is nothing short of a miracle, because this movie is actually pretty good.  The cinematography here is beautiful, and there are shots that are simply breathtaking.

Whether this is a faithful adaption or not isn’t the issue, because let’s face it, the book will always be better in our opinions, and you kind of have to look at a film as a separate entity.  There are many liberties taken with the story here, and I know that will upset some, and for those of you that have a hard time separating the love you have for the book, I’d recommend you sit this one out.  For me I’ve kind of opened my mind to adaptions and view it simply as another version of the same story I love.

The story of Captain Long John Silver (Eddie Izzard) and his quest to recover his treasure is filled with so many double crosses along the way it’s hard to tell for sure if he’s a good guy or not.  I think because it’s hard for us to decide if he’s good or bad makes him that much more awesome of a pirate considering he lies, cheats and kills for a living and we still have our optimism about him.  How Long John takes in the young Jim Hawkins (Toby Regbo) and goes about grooming him to become a pirate but one better than himself conjures childlike joy and envy, because I wish I were in Jim shoes.

Considering this has nowhere near the budget of a POTC film, we are given a much more grounded film, but because the source material is so strong, big flashy effects or giant action set pieces are just not needed here.  Getting to see Long John sitting in the shadows as he organizes a mutiny is just as engaging as seeing the pirates stage a siege on an old stockade British soldiers are holed up in.  There is plenty of mayhem and backstabbing to keep this 3-hour-plus film going, but the run time may also be its undoing.   Now that the film is together in one piece it may be tough to get younger kids to sit down for the whole film considering it is lacking the flashy effects.

With Donald Sutherland as the ruthless Captain Flint that betrayed Silver, it’s a shame we don’t get to see more of him, but from seeing him in the start of the film it’s obvious he was having some fun with the role.  Also Elijah Wood makes more than just an appearance but actually has a substantial role in the latter half of the film as Ben Gunn, one of Flint’s crew members that has be stranded on the island for years.

Though it is a bit long, I still really enjoyed this film and I can say with certainty it was far more enjoyable than the last POTC sequel.  Hopefully this can pave the way for more pirate films down the road.  If you’re looking for a true faithful adaption of the book, I’m sorry, that’s not here.

Brent Lorentson is a horror writer and film critic based out of Tampa, Florida. With a BA in Digital Film, he co-wrote and co-directed Scavenger Hunt. His short stories have appeared in various horror anthologies. In 2019 his short script Fertile Blood will be a part of the anthology horror film Slumber Party. He is currently working on his first novel A Dark and Secret Place set to be released in late 2019. Favorite Films: Taxi Driver, Fight Club, I Saw the Devil, The Wild Bunch, Dawn of the Dead, A Clockwork Orange, Pulp Fiction, Heathers, The Monster Squad, and High Fidelity.
Big Trouble & The Crew + Oscar – Triple Feature Total Recall (Mind-Bending Edition) (Blu-ray)