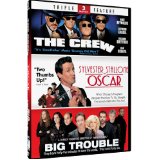 “Miami Beach. Used to be the average age around here was, like, 82. And then that broad Madonna decides that this is the place to be, and the next thing you know, everywhere you turn, it’s women with big breasts, men with big breasts. Breasts are very big here.”

This is one of those budget triple-feature DVD’s presenting three of Touchstone Film’s underperforming comedies, The Crew, Oscar, and Big Trouble. I must say I enjoyed the fact I hadn’t seen any of the films before. Although none of these titles are especially funny, they mostly proved entertaining and decent enough with extra points for great casts.

First up we look at The Crew, which, produced by Men in Black director Barry Sonnenfeld, is weakest movie of the three. Four New Jersey mobsters, Bobby Bartellemeo (Richard Dreyfuss), Joey ‘Bats’ Pistella (Burt Reynolds), Mike ‘The Brick’ Donatelli (Don Hedaya) and Tony  ‘Mouth’ Donato (Seymour Cassel) grew up together and became best friends in the sixties an end up living their retirement years in the same seedy Miami residential hotel. When the young and the rich threaten to convert their hotel into another art-retro South Beach Yuppie playpen, the aging mob crew devise a plan to scare away the investors. They smuggle a John Doe corpse out of the local mortuary The Brick works part time at and stage what looks like a mob hit with it, leaving the body and a note claiming more deaths are coming in the hotel’s lobby.

Turns out the cadaver used to be the father of Columbian drug lord Raul Ventana (Miguel Sandoval) who suffered from advanced Alzheimer’s and, in a fugue of dementia, wandered from his nursing home only to die on the beach. This sets off a series of vengeance hits, leading to an elaborate blackmail scheme involving a hooker with a heart of brass (Jennifer Tilly), the estranged daughter of Bobby Bartellemeo (Carrie-Anne Moss), now working as the detective investigating the case, and her scumbag partner (Jeremy Piven).

Meant to be a spoof of Goodfellows, screenwriter Barry Fanaro (Kingpin) drops the ball both in the humor department as well as the mob angle. The story is completely unbelievable, leading to some horrible overacting by Reynolds, terrible New Jersey dialect from Dreyfuss, and TV-movie-style directing from Michael Dinner. Worst of all, it just isn’t funny. Even if you love mob movies, this one will leave you yawning.

“Swear in front of your family, in front of Father Clemente, in front of the Madonna; swear you will become an honest man. Give up this shameful life.”

In Oscar, Angelo “Snaps” Provolone (Sylvester Stallone) made his dying father (Kirk Douglas) a promise on his deathbed; he would forever forsake the world of crime and become an honest businessman. Hence on the day he tries going straight, everything plots against him, threatening to pull him back into the mob life as he attempts to find a husband for his spoiled daughter Lisa (Marisa Tomei).

Oscar was adapted from a stage play, and it shows. Director John Landis stages everything in Snaps’ mansion, and the actors broadly overact, playing it for “the back row.” If you can get past the overly theatrical performances, there are some charming and funny bits to be found, especially involving Snaps’ button men, Aldo (Peter Riegert) and Connie (Chaz Palminteri) and a quirky performance from Tim Curry as allocution expert Dr. Thornton Poole.  However, Stallone is to comedy what McDonalds is to fine dining.

A great cast of character actors and an amusing plot keep Oscar from being a complete disaster. Cleverly staged gags involving a bag full of cash and some spitball-fast screwball comedy lines will leave you smiling, if not exactly laughing. Oscar plays out as an amusing comedy with plenty of old school charm.

“Let’s get the hell outta here, Snake. I think I hear one of them silent alarms.”

When Barry Sonnenfeld adapted Dave Barry’s first novel Big Trouble into a film it was pre 9/11. How could he or Disney anticipate the themes of bombs and lax airport security would be hell to play for laughs after that tragic date?  Disney withheld release on the film until April 5th 2002, but it didn’t make the premise any less cringe-inducing.

The complex story involves a botched assassination attempt on a corrupt Miami business man (Stanley Tucci) spiraling out of control until the frenzied finale involving smuggling a nuke onto an airplane. How could such a great cast, with such a screwball concept, turn out as such a so-so comedy? This movie does have the most laughs of the three in this set, but what damns it isn’t the “too soon” premise, but the heavy-handed direction from Sonnenfeld. Somehow the clever script simply falls flat in the director’s hands, but man does try hard to be comedy’s Die Hard.

This value set DVD is worth the bargain-basement price if you are fond of mediocre comedies with stellar casts. The films are mildly amusing and never offensive, but you will forget them before the disc ejects from your player.