Posted in: No Huddle by Brent Lorentson on August 6th, 2012 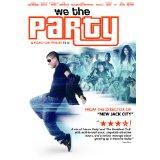 Going into this film all I really knew was that it was written and directed by Mario Van Peebles (New Jack City) and a vague memory of the trailer I caught on a previous DVD I reviewed.   One look at the unappealing cover and it had me thinking I got stuck with a low-budget Step Up knockoff, and I just really wasn’t looking forward to this film, but I do try and stay optimistic, because sometimes you never know when something good may come along.  This is one of those films.  It’s not great, and it’s hard to even consider putting this in the same league as The Breakfast Club as the DVD cover innocently makes that connection.  But of all the high school films that have come out in previous years, in my humble opinion this may be the best one out there as it tackles some very delicate and important issues without coming off like a bad movie of the week.

With prom on the horizon and seniors getting ready for graduation and college, Hendrix (Mandella Van Peebles), a junior, has his mind set on getting a car of his own and asking Cheyenne (Simone Battle) a senior, to the prom.  His friends are excited about the prom as well but more so about the prospect of losing their virginity by the night of the dance.  They’re so excited that they make a bet to see who of their group will be the first to pop the proverbial cherry.  The bad news for Hendrix is that Cheyenne has an overprotective father that just so happens to be a cop (played by Michael Jai White) and he won’t even consider a guy to date his daughter unless he at least has a 3.5 GPA.  This minor speed bump doesn’t stop Hendrix from trying, so he asks for her help in tutoring him, and in return Hendrix offers to help her with her graduation video that revolves around the notion of success.

Since the kids in the film all go to an art school and with Hendrix having a good business sense, to make money he organizes house parties and has fellow classmates and friends to partake in rap battles or simply perform at the parties where record label executives are invited.   It’s here we see the school’s brooding underachiever C.C .(Conscious Criminal played by Y.G.) shine in the rap battle only to have to turn over his money to his older brother Big D (Snoop Dogg, sorry, will not abide in calling him Snoop Lion).  And it is also at the party where we see Hendrix’s friends laying the ground work for making their dates for prom.

It’s during the making of the video where the film finds its emotional core as the students attempt to conduct the interviews with the homeless, offering them five dollars for their consent.  Many of the students here are rude and obnoxious to the point you really want to punch them, while a few of students see this as an eye-opening experience.  This was the high mark of the film as we see the reactions of the students when interviewing a teen like themselves who is on the streets trying to support her mother, and then things become all the more difficult when they find a young child asking them to interview his grandmother.  Between this and then recalling the bus monitor incident earlier this year, it had me wonder if any value could come out of students being required to volunteer with the shelters to graduate. This film really hit the point that we live in a time where kids have gotten out of hand and don’t understand the consequences of their actions.

As the rest of the film plays out it seems to lose its momentum till a sequence plays out involving the theft of the money meant to go towards the big dance.  Having a student step up and do the right thing and confess, though I don’t ever think this would really happen, I feel it was Van Peebles’ intention to simply say he has hope in the youth of America and that there are those out there willing to sacrifice for the better of the majority.

The relationship of father and son as well as teacher and student was handled so well here in the dynamic between real life father and son Mario and Mandella Van Peebles.  This film seemed to be a family affair as many others of the Van Peebles family are throughout the film, but it’s seeing Mario and Mandella together that really shone with that chemistry that just can’t be faked, that only can be found in the interaction of a real life father and son together.  Mandella has some big shoes to fill, but the potential is definitely there on the screen, and we can only hope he follows in the footsteps of his family and strives to make a difference in the film community.

Before I let this movie go, though, I have to comment on the biggest drawback of the film, and it’s mainly on the technical side.  There is way too much flash here.  This isn’t a music video, this is a solid drama that should have been treated as such.  The various split screens and some of the flashy effects in the titles simply hurt not helped here.  Where the editing could have helped most would have come in the form of a leaner film trimming at least 15 minutes off.   Overall, though, this is a good movie with a good message for teens.

Brent Lorentson is a horror writer and film critic based out of Tampa, Florida. With a BA in Digital Film, he co-wrote and co-directed Scavenger Hunt. His short stories have appeared in various horror anthologies. In 2019 his short script Fertile Blood will be a part of the anthology horror film Slumber Party. He is currently working on his first novel A Dark and Secret Place set to be released in late 2019. Favorite Films: Taxi Driver, Fight Club, I Saw the Devil, The Wild Bunch, Dawn of the Dead, A Clockwork Orange, Pulp Fiction, Heathers, The Monster Squad, and High Fidelity.
La Grande Illusion (Blu-ray) Age of the Dragons