Age of the Dragons

Posted in: No Huddle by Brent Lorentson on August 6th, 2012 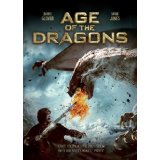 Ever wonder what Herman Melville’s classic tale Moby Dick would have been like if instead of a white whale Ahab was obsessed with but a giant white dragon?  Well, then you’re in luck, because that is exactly what Age of Dragons is, a literal remake of the classic but with dragons.  At first I found this idea pretty awesome, and heck it even has Danny Glover (Lethal Weapon) with Vinnie Jones(X-Men Last Stand); what could possibly go wrong?  Sadly, a lot can go wrong.

The story opens with a young Ahab witnessing his sister’s death at the hand (or talon in this case) of the white dragon.  Ahab barely escapes with his life as his body is severely burnt whenthe dragon breathes its fire onto him.  This reason is as good as any to develop a strong hatred for dragons, and from here the legend of the great dragon hunter is born.  It’s at a tavern Ishmael (Corey Sevier) enters with his partner Queequeg (Kepa Kruse) the two adventurers are looking to join Ahab’s crew and slay some dragons.  After a harpooning contest with Stubs (Jones) it’s decided they are good enough to join this elite crew of hunters.  My first problem came here, so to decide if this guy is good enough to venture out into the wild and slay dragons you simply have him throw a harpoon as though it were a dart into a painting across the room?  This is really all it takes to go slay dragons and be able to boast how awesome a hunter you are?  Sure, it’s a film with dragons and shouldn’t be taken too seriously, but there was trouble in logic town, and this kind of logic would be the film’s undoing.

With Ahab’s adopted daughter Rachel ( Sofia Pernas) signing the boys up to go slay dragons, it’s time to set off on their quest.  Now I understand in Moby Dick they were on a ship to kill the whale, but there is no ocean where these boys are hunting dragons, so instead of just riding horses and bringing along a wagon we havea giant ship on wheels.  Never mind how this is going to navigate its way through the mountainous areas through dying trees and snow.  This little ship is awesome with all its harpoon launchers and all the luxuries for that dragon hunter on the go, but it’s still a boat with wheels.

As the hunt continues, the crew encounters their first dragon.  Stubs draws first blood as he hits it with the harpoon with a tether that is hooked to the boat so the dragon has nowhere to fly off to.  Rachel gets in her shot at the dragon as does Queequeg, but it is not enough to bring the beast down, and it is up to Ishmael to deliver the killing blow, but he panics.  It’s not till the dragon spews his fire onto Stubs, killing him, that Ishmael decides to launch his harpoon into the beast.  Did I mention this boat on wheels is made of wood and enough fire was breathed to kill a man, but apparently in this world wood doesn’t burn at all, because this wooden vessel should be nothing more than charred rubble after this attack.

What is going for this film is how Danny Glover handles the material he has been given.  His take on Ahab is by no stretch of the imagination equal to Gregory Peck’s, but it is still an enjoyable role to see him in.  As for the rest of the cast, it just seemed they were there to recite some lines then leave.  I put this blame on the director, though kudos is given to him for the strong visuals he was able to put up on the screen. It would be easier to dismiss the director if it weren’t for the fact the guy does have a good eye for capturing beautiful scenery as well as an effects heavy action sequence.

Perhaps one day we’ll get a dragon film that is every bit as awesome as the creature deserves, but this film is not it.  Right now I’ll have to settle for Reign of Fire and Dragon Heart till the next film steps up to the plate.

Brent Lorentson is a horror writer and film critic based out of Tampa, Florida. With a BA in Digital Film, he co-wrote and co-directed Scavenger Hunt. His short stories have appeared in various horror anthologies. In 2019 his short script Fertile Blood will be a part of the anthology horror film Slumber Party. He is currently working on his first novel A Dark and Secret Place set to be released in late 2019. Favorite Films: Taxi Driver, Fight Club, I Saw the Devil, The Wild Bunch, Dawn of the Dead, A Clockwork Orange, Pulp Fiction, Heathers, The Monster Squad, and High Fidelity.
We The Party Earth From Above – Preservation of Water and Forests/Food and Wildlife Conservation