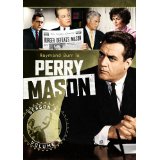 Even the best have a bad day. Look at the cover art for the Perry Mason Season 7 Volume 1 release and you’ll see the unexpected newspaper headline: Burger Defeats Mason. No, this isn’t a Dewy Defeats Truman grand mistake. It happened, and you get that very episode in this rather historic Perry Mason release. This is one you are absolutely going to want to have in the collection. No Mason fan should be caught dead without it.

Erle Stanley Gardner wrote crime fiction, and while many of his 100 or so works are unknown to most of us, he created a character who has become as identified with criminal lawyers as any other in fiction. It was in these crime novels that Perry Mason first faced a courtroom. He developed a style where he would investigate these terrible crimes his clients were on trial for. He would find the real killer, and in what has become a Hollywood cliché, reveal his findings in a crucial moment during the trial. While we may not remember the novels, we all remember the man in the persona of Raymond Burr.  Burr had a commanding presence on our screens and enjoyed a well deserved 11-year run as the clever lawyer. What makes this run so amazing is that the show followed pretty much the same pattern the entire time. We always know what’s going to happen, but we wait eagerly for that gotcha moment when Perry faces the witness on the stand. We know when he’s got the guy squarely in his sights, and we can’t sit still waiting for him to pull the trigger. OK, so maybe that’s a little over the top, but so was Perry Mason. From the moment you heard that distinctive theme, the stage was set. To say that Perry Mason defined the lawyer show for decades would be an understatement. Folks like Matlock and shows like The Practice are strikingly similar to Perry Mason. If you haven’t checked this show out, this is your chance. See where it all began.

Here you’ll find the first 15 episodes of the 7th season on four discs. Some of the highlights include: Can Perry help a con man with a change of heart after he’s charged with murder? Find out in the season’s initial episode The Case Of The Nebulous Nephew. The Case Of The Deadly Verdict makes history. Perry loses the case, and it means a woman is going to be put to death unless Perry can change history in a hurry. In The Case Of The Bigamous Spouse Perry must help a woman who has been poisoned to cover up a scandal. Now Perry must also protect her from the cops. A teen joyride leads to trouble for a young man when a liquor store is held up and someone ends up dead. Perry tackles the fallout in The Case Of The Devious Delinquent. Did a brother literally knife another brother in the back over who gets their family’s clothing store? That’s what Perry has to find out in The Case Of The Badgered Brother. Most of us would love to murder our father-in-law, but did Perry’s client actually do it? The answer can be found in The Case Of The Accosted Accountant.

Guest stars this season include: Richard Anderson, John Mitchum, Julie Adams, Garry Walberg, Bill Mumy, Michael Conrad, James Hong, Alan Hale, Diane Ladd and Ivan Dixon. The last episode here also stars Karyn Kupcinet who was found dead just after shooting the episode and before it even aired. She died at just 22 years old on Thanksgiving Day. There had even been speculation, never proved that her death was related to JFK’s.

For many reasons these are certainly historic episodes of the series. “So help me God.”

Gino Sassani is a member of the Southeastern Film Critic's Association (SEFCA). He is a film and television critic based in Tampa, Florida. He's also the Senior Editor here at Upcomingdiscs. Gino started reviewing films in the early 1990's as a segment of his local television show Focus. He's an award-winning recording artist for Omega Records. Gino is currently working on his 8th album Merchants & Mercenaries. Gino took over Upcomingdiscs Dec 1, 2008. He works out of a home theater he calls The Reel World. Favorite films: The Godfather, The Godfather Part II, The Body Snatcher (Val Lewton film with Karloff and Lugosi, not the pod people film), Unforgiven, Gladiator, The Lion King, Jaws, Son Of Frankenstein, The Good, The Bad And The Ugly, and Monsters, Inc.
Battleground Stallone Collector’s Set (Rambo: First Blood / Cop Land / Lock Up) (Blu-ray)