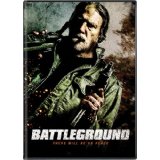 I’ve said before that they just don’t make action movies like they used to. I’d like to slightly amend that statement: they still make action movies like they used to, it’s just a heck of a lot harder to find them. As production costs continue to rise, studios seem to be playing it safer than ever in terms of which movies get the widest releases. As a result, bloodless PG-13 flicks designed to hit as many quadrants as possible tend to grab the most screens. Put it this way: I haven’t seen the new Total Recall, but I’m fairly confident there’s no scene where Colin Farrell yells, “See you at the party, sweetheart!” while holding the bloody stumps of Kate Beckinsale’s arms.

Battleground — an action-horror hybrid out on DVD Aug. 28 — is actually reminiscent of a different Arnold Schwarzenegger action classic.

After six bank robbers are forced to lay low in the aftermath of a bloody heist, the group is drawn into the woods, where they are systematically picked off by an unseen Predator. (The group even comes across a traumatized woman, who they temporarily take prisoner.) Except this time the prey — who more closely resemble the mostly non-mercenary scumbags in the underrated Predators — are being hunted by a psychotic Vietnam War veteran rather than “one ugly motherf—er.” (I promise that’ll be the last time I link to an Ahnuld one-liner…at least in this review.)

Battleground gets off to a bit of a puzzling start with a disconnected opening credits sequence introducing us to The Hunter (Hugh Lambe), but we quickly get to know the bickering bank robbers. (We never see the heist, which is totally fine: we didn’t need to see the heist in Reservoir Dogs to get the gist.) McKay and co-writer Sean McAulay actually take time to try and develop their characters. There’s even a moment in the woods where one of the robbers actually realizes they’re over matched and pragmatically suggests they walk away, which almost never happens in dumb action movies. (Of course, since this is a dumb action movie, no one listened to him.)

Director/co-writer Neil McKay may reference several movies that are vastly superior — in addition to Predator, there’s some First Blood and a hint of The Deer Hunter in this stew — but his feature film debut also includes a handful of moments that stand out in their own right. I’m thinking of the impressively disgusting eyeball and face removal of one of The Hunter’s unlucky victims, and how the intensity of a Russian Roulette scene made up for the fact that there was absolutely no reason for it to be happening. Overall, the action sequences and kills were pretty solid; a bit silly and a lot over the top.

Sure, there’s an undeniable whiff of amateurism that comes from this sort of low-budget production — the blood is way too red — starring a bunch of people you’ve never heard of. However, the cast mostly keeps that whiff from becoming an overpowering stench. Lambe, acting like the worst-case scenario for Gary Busey, commits impressively to his crazy, underdeveloped character. There’s not a lot to work with there, but he leaves a mark. Among the robbers, Bryan Larkin (looking a bit like a pumped Louis CK) is a suitably strong presence as the de facto leader, while Bob Cymbalski was amusing (not always intentionally) as badass Tex, who waddled into most scenes with his sunglasses and bulletproof vest. I liked that there were no token pretty boys in this cast, and the actors legitimately looked like a bunch of low lives. (I mean that in the nicest way possible.) Meanwhile, Lee Sandford shows up to provide the female perspective. And by “female perspective”, I mean cleavage.

I seriously doubt anyone will be quoting dialogue from this movie five years from now. (Or even five minutes after it’s over.) There’s not a ton to connect with here: you can either attach yourself to the inept, ruthless bank robbers or the enigmatic, psychotic Vietnam vet we know nothing about. However, this is a well-made and nasty little action movie with a horror-style boogeyman dropped in for good measure. If you’re in the mood for something that won’t be playing at your local multiplex — or maybe you just want to save money on a movie ticket, gas, and concessions — you could do a lot worse than giving this film a look.