Posted in: No Huddle by Gino Sassani on September 7th, 2012 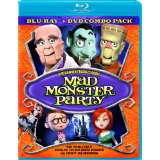 The considerable talents of Arthur Rankin, Jr. and Jules Bass are probably best known for their Christmas classic Rudolph The Red-Nosed Reindeer. It’s been an annual holiday classic since the 1960’s. There have been quite a few other television classics over the years. But the team did not restrict themselves to just doing television specials. Not at all. With the enormous success of Rudolph they looked toward the feature film business. At that time Disney pretty much had a monopoly on the animated feature, and Rankin & Bass decided to give the Mouse House a run for their money.

The first of these films was the now-forgotten Willy Bean & His Magic Machine. The film was actually begun during the Rudolph production and featured pretty much the same talent both in front of and behind the camera. While it’s a forgotten film today, it led to distribution deal and a couple of other relatively unknown releases. The deal culminated in the release of Mad Monster Party. While it tanked at the box office, the property found new life in syndicated television and would show up as an annual Halloween staple for many years. The film actually played better in its trimmed television condition. The truth is that much of the film was padded to make it more of a feature film. It was there on television that horror fans fell in love with the little film that could.

It was a pretty silly plot, of course. Dr. Frankenstein (Karloff) has just invented a formula that can destroy life on a massive scale. Just one drop can destroy a large area with one huge mushroom cloud. Now the man who created life had the ultimate weapon to destroy it. But he’s been getting tired of being the leader of the monsters and plans to retire and leave all of his secrets, including the new weapon, to his chosen successor. He invites all of the monsters to a “Mad Monster Party” to demonstrate the weapon and name his successor. The party includes such favorites as Dracula, The Werewolf, The Mummy, The Creature, The Invisible Man and Dr. Jekyll (with Mr. Hyde, of course). He’s also invited his only living relative, Felix Flanken, who works as a soda jerk in America. He has no idea about the monster world or that he has been chosen to be the new leader of the monsters. The party also includes Fang (the Frankenstein Monster) and his Mate (Diller). There’s also Francesca, Dr. Frankenstein’s assistant. Of course, there are plenty of jealousies and plots to kill Felix to gain control of these secrets.

The film is animated in stop-motion under a process Rankin & Bass called “Animagic”. Karloff is masterful as Dr. Frankenstein. The stop-motion doll looked quite a bit like the actor, as did Fang. The other notable voice actor was the recently deceased Phyllis Diller as The Monster’s mate. Again the sculptors made the doll look very much like the actress with the silver hair of The Bride Of Frankenstein, minus the lightening bolt. Famous voice actor Allen Swift provided all of the other male characters. He was a genius with voices and gave each of the characters a distinctive Hollywood voice. Felix is quite easily recognized as a Jimmy Stewart voice. You’ll also pick up a pretty good Peter Lorre. The animation and character style was very much like that of Rudolph and while maybe not as charming, it continues to be a hoot for horror fans. It should also be noted that the look of Dracula here was copied almost exactly when the folks at Sesame Street created The Count.

There are a few songs, but none of these are very memorable. The performances here fall more than a little flat, and the melodies don’t have the catchy brightness that was found in Rudolph. Karloff even performs one of the songs, but he’s pretty much speaking and not singing at all.

No question that the film appears dated today. It’s still a lot of fun. There have been many previous releases, and the rights have made the rounds over the years. That means there are more than a few bad copies of the film out there on DVD, VHS, and even laser disc. This is the first release on Blu-ray. And while the film is somewhat of an improvement over the more recent DVD release, it’s not perfect by any means. The same extras have been ported over, and the audio doesn’t appear to have been upgraded much, if at all.

Still, if you still haven’t picked up a copy of the film on home video, this is the best copy out there, even if it is only marginally. Even with its flaws the film is a wonderful piece of nostalgia that deserves a place in your video collection. “Nobody’s perfect.”

Gino Sassani is a member of the Southeastern Film Critic's Association (SEFCA). He is a film and television critic based in Tampa, Florida. He's also the Senior Editor here at Upcomingdiscs. Gino started reviewing films in the early 1990's as a segment of his local television show Focus. He's an award-winning recording artist for Omega Records. Gino is currently working on his 8th album Merchants & Mercenaries. Gino took over Upcomingdiscs Dec 1, 2008. He works out of a home theater he calls The Reel World. Favorite films: The Godfather, The Godfather Part II, The Body Snatcher (Val Lewton film with Karloff and Lugosi, not the pod people film), Unforgiven, Gladiator, The Lion King, Jaws, Son Of Frankenstein, The Good, The Bad And The Ugly, and Monsters, Inc.
Piranha 3DD (Blu-ray 3D) For the Love of Money