Posted in: Disc Reviews by Bob Ross on September 7th, 2012 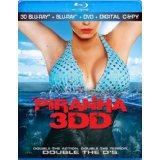 What’s the latest home video gimmick? 3D, of course. And what’s the leading genre for cheap thrills on a low budget? The goofball horror movie, right? So it makes sense – sort of – for an enterprising filmmaker to throw together a low-comedy fright flick with cheesy gross-outs and bouncing breasts. See, in 3D, those babies can bounce big-time. And if that’s not enough boost for the boys in the audience, you also get severed heads, detached limbs, barf jokes and the dopiest plot this side of Lake Placid the Final Chapter. OK, you caught me. I never saw that one, it just sounds ridiculous.

But I did sit through Piranha 3DD, which was not difficult because (a) I still enjoy the novelty of 3D home video, (b) it’s only 82 minutes long, and (c) the film earns its R rating (for “sequences of strong bloody horror violence and gore, graphic nudity, sexual content, language and some drug use”) while refusing to take itself seriously for even a moment.

The whole film is a running joke, because the script seldom confronts the absurdity of tiny, super-strong carnivores swimming into a recreational water park and turning human beings into shreds of bloody chum. Let’s call it a guilty pleasure. Cute bikini girls help a bit, but so does a cast stacked with fine comic actors, notably David Koechner as the unscrupulous theme park operator, Christopher Lloyd as the scientist who knows what’s happening, Gary Busey as the opening-act victim, and Ving Rhames as a disabled veteran of previous Piranha wars.

But the Numero Uno guest star is David Hasselhoff, who delivers a hilarious, good-natured send-up of his own Baywatch persona and rough reputation. The guy is a hoot, and in pretty good shape considering what he’s been through.

Danielle Panabaker and Matt Bush lead the contingent of normal young folks who get trapped and targeted by the vicious fishies. And it’s almost amusing to see the phony-looking fish effects, although I liked the bit where a piranha head soars skyward, right into the 3D lens.

Caution to the sensitive: Some of the sight gags are truly repulsive, involving body parts we just don’t mention or mutilate in polite society. You will cringe and maybe laugh, and that’s what director John Gulager is plainly getting at. (Yes, he is the son of veteran player Clu Gulager, and Pop makes a cameo appearance.)

Can the magic of 3D make a campy comedy-horror movie better? Not really, but it does make it more fun to watch one time.

The video is a modest MVC, with a lot of saturated color designed for short attention spans. But at least the nude scenes are as clear as they are brief.

The DTS-HD Master Audio 5.1 soundtrack is adequate, but not exceptional. You don’t want to outclass your screenplay with superior sound, do you?

The 3D disc has no extras. The following features are on the standard Blu-ray and all in Standard Definition:

Deleted Scenes: (2:34) There are three with a play-all option.

The Story Behind The DD: (7:49) Strictly a promo piece. Consider it an extended trailer with a few interview clips.

The Hofftastic World Of David Hasselhoff: (2:09) Pretty much all of this is in the previous feature.

It’s a novelty act, for sure, and everyone is in on the joke.