Posted in: No Huddle by Gino Sassani on September 12th, 2012 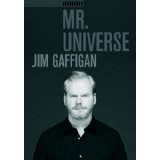 Of the standup comedians that are working the circuits and bringing new material to the stage with every tour, my favorite guy without too much hesitation is Jim Gaffigan.  His deadpan delivery of observational humor hits me just right.  Whether he’s making comments about Hot Pockets, bacon, or just being lazy, he manages to pull humor from some of the most mundane things and make it relate to his entire audience.

For those unfamiliar with Gaffigan you may have seen him on such TV shows like That 70’s Show as well as the TBS series My Boys.  Now if you’re still scratching your head trying to figure out where else you may have seen him, he’s also done some work on the big screen as well.  He had a role in 13 Going on 30, 17 Again, Going the Distance, Away We Go, and many other roles.  If even still you’re shaking your head, its okay, because for those that are new to the comedic styling of Jim Gaffigan, Mr. Universe is a nice introduction for a first time viewer.

With Mr. Universe, Gaffigan kicks off his set discussing what it’s like being a father of four kids and taking the kids to Disney.  His observations about waiting in line for the Dumbo ride and vacationing consisting mostly of making time to eat are relatable and will bring a few chuckles, but where the routine picks up speed and the laughs roll comes with his input about working out and going to the gym.  I could lose a few pounds, so when he comments about taking the tour around the gym and in the moment being motivated but the next day wanting to let the muscles relax.  It was nice to know I wasn’t the only one.

Things only keep getting funnier as he talks about his and America’s love for McDonalds.  I’m not the biggest fan of the place, but I’m guilty like many others about taking advantage of those amazing deals.  Gaffigan doesn’t attack the place but simply points out how no matter how bad the food can be for us, we simply can’t resist.  His mentioning of using the Shamrock Shake as a reminder that St. Patrick’s day is just around the corner was pretty great as well.

Some comedians tend to lose their audience as the routine goes on, but Gaffigan seems to just pick up speed and just feeds off his audience.  He even manages to make depressed whales funny and takes a few jabs at Domino’s and Subway before winding up his set discussing vitamin supplements.  How he manages to string all these random topics together into a cohesive act is just part of what makes him the success that he is.

What makes this routine work like all his previous ones before is his use of the audience’s inner voice.  For those that are unfamiliar, it’s when he simply uses a higher voice and makes comments about his set from the perspective of an audience member.  This clever gimmick Gaffigan brings to his act is simply part of the charm that makes him so likeable in my opinion.  Mr. Universe may not be his best routine, but it’s still really entertaining and filled with some good laughs that pretty much the whole family can enjoy.

Gino Sassani is a member of the Southeastern Film Critic's Association (SEFCA). He is a film and television critic based in Tampa, Florida. He's also the Senior Editor here at Upcomingdiscs. Gino started reviewing films in the early 1990's as a segment of his local television show Focus. He's an award-winning recording artist for Omega Records. Gino is currently working on his 8th album Merchants & Mercenaries. Gino took over Upcomingdiscs Dec 1, 2008. He works out of a home theater he calls The Reel World. Favorite films: The Godfather, The Godfather Part II, The Body Snatcher (Val Lewton film with Karloff and Lugosi, not the pod people film), Unforgiven, Gladiator, The Lion King, Jaws, Son Of Frankenstein, The Good, The Bad And The Ugly, and Monsters, Inc.
Lewis Black: In God We Rust Contest: Win The Essential Games Of The Texas Rangers From A&E