Lewis Black: In God We Rust

Posted in: No Huddle by Brent Lorentson on September 12th, 2012 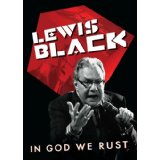 It would be fair to say Lewis Black is not for everyone.  When in the mood for comedy, few people would decide on watching an old man rant and rave on a stage to the point you expect him to simply keel over from a self induced heart attack.  You won’t find any puppets or redneck humor when watching one of Black’s routines.  In fact what you can expect is at some point to maybe get a little upset if not outright offended.  But that’s okay.  He knows his routine is not for everyone, so much so in fact he even opens this show with a note of warning about what to expect from his show.  And then the anger-fueled rants continue from there.

When I first sat down for this I really wasn’t sure what I’d be getting into, since all I had seen to judge him on were from the times he appeared on The Daily Show.  But I have to say he had me reeled in once he started ranting about the absurdity of Valentine’s Day being six weeks after Christmas and at the height of flu season.  Granted I can’t even picture Black celebrating any holiday with the exception of possibly April Fool’s and using it as ammunition to simply degrade people even more.

It doesn’t take long before his act starts to delve into politics, and here is the point where he seems to ruffle more than a few feathers.  What I do appreciate, though, is that he doesn’t just beat up on one side.  He spreads his abrasiveness to both sides of the aisle.  And with the show taking place in Michele Bachmann’s home state, he managed to get a bad crowd reaction at one point.  But that’s what you should expect from him when you go to his show. He’s not there to pander to the audience, but to rant and rave about subjects that upset him.

One of my favorite moments came when the topic of the Verizon Droid arose.  Upon mentioning the name the crowd bursts into a mini applause. His response seemed genuine and not staged when he says, “Don’t you ever applaud an inanimate object again.”  He uses this moment to discuss how people seemingly worship these objects and makes the comparison to the worshiping of the Golden Calf.  His point is so well made about society and our dependency on our cell phones that I feel this became one of the best bits in a standup act that I’ve seen or heard in years.

Now everything is not so angry and heavy-handed through this act.  In fact he does have a bit that had me laughing quite hard concerning his use of LSD and losing “not forgetting” his name.  His recollection of that night was pretty funny and one of the high points of the night.  But overall the show was good, nothing great, but I had a better time than expected with it.  For those that are looking for some good laughs and not a vulgar attack on society you may want to skip this one.  But for the cynical comedy fans out there, I’m sure you’ll have a few good laughs.

Brent Lorentson is a horror writer and film critic based out of Tampa, Florida. With a BA in Digital Film, he co-wrote and co-directed Scavenger Hunt. His short stories have appeared in various horror anthologies. In 2019 his short script Fertile Blood will be a part of the anthology horror film Slumber Party. He is currently working on his first novel A Dark and Secret Place set to be released in late 2019. Favorite Films: Taxi Driver, Fight Club, I Saw the Devil, The Wild Bunch, Dawn of the Dead, A Clockwork Orange, Pulp Fiction, Heathers, The Monster Squad, and High Fidelity.
Dr.Jekyll and Mr.Hyde (2008) Jim Gaffigan: Mr. Universe