Posted in: No Huddle by Brent Lorentson on September 17th, 2012 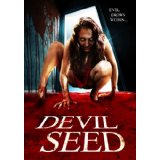 It seems the new recycled trend in horror is the exorcism/ possession genre.  For me personally this is the only horror genre that tends to get to me, since I was brought up Catholic and the thought of the devil possessing me was thought to be a very real possibility.  The strange thing is The Exorcist seems to be the only film that I would consider great and would even say it’s one of the greatest horror films of all time.  Many films have tried to deliver, but in the end the films seem to just fall flat, the closest being The Last Exorcism though that film also has its fair share of naysayers.  But I believe one day we’ll get a film that will rank up there with The Exorcist.  But that film is not Devil Seed.

As the opening credits roll we are given flashes of an exorcism gone terribly wrong in Boston, Mass back in 1972.  We jump to present day as Alex (Michelle Argyris) returns from visiting her sick grandmother.  In the time she’s been gone Alex’s roommates Jess and Bree have moved into a bigger and nicer place, and lucky for them the rent is still the same.  One look at the house and you know bad things are going to happen here (for some reason it sort of reminded me of the Amityville house but on a smaller scale).  While Alex has been gone, the new place isn’t the only thing to change.  Apparently over the summer her boyfriend Brian has been sleeping with her roommate Bree.  Brian cheating on his girlfriend of two years is only the starting point to how much of a douche this guy turns out to be, but I’ll hold off on that for now.

Once Alex is settled in the girls venture out for a night out at the clubs for some drinking and dancing.  As the night winds down and Alex and Jess are left alone, it’s on their return walk home that they stumble upon a fortuneteller.  The old woman is annoyed with the drunk girls, but still is willing to take their money for a quick reading.  During the reading things start to get a little creepy as the fortuneteller seems to actually know a thing or two about Alex and her past.  But that’s not all she sees, as the fortuneteller sees a dark figure that is in the room with them and takes this moment of opportunity to possess Alex.

The next morning while the girls are nursing hangovers, Jess approaches Alex about what happened the night before, but everything is a blur and she has no clue as to what happened. The mystery starts to thicken as strange things start to occur in the house that only Alex seems to encounter.  Here we are hit with some standard jump scares, but the movie has me hooked.  Is it great, no, the acting is the biggest problem, but the director Greg A. Sager knows what he’s doing when building suspense with a meager budget.

Following a scene where Alex is molested by an unseen demon and where we are led to believe she is impregnated, the movie seems to fall apart.  What follows are numerous creepy scenes we’ve seen played out in several films before.  We see Alex go through everything from vicious attacks, to hallucinating, to blacking out and seeing demons around her.  Everything was well done, but it just did nothing to further the story, and if you’ve ever seen The Exorcist, well, you might recognize more than one or two scenes as the movie progresses.  And how the boyfriend reacts to Alex as she’s pleading to him for support, it’s just frustrating how much you want to punch him.  And concerning her jealous roommate Bree , some of her reactions as the film progresses just seem too much, especially in an incident towards the end of the film.

What works so well with this film is the relationship between Alex and Jess (Shantelle Canzanese).  If the film remained on the two girls and Jess trying to help her friend, I think we could have gotten something much better.  The girls have a great chemistry together.  A simple scene of Jess simply trying to get her friend to take a bath was done so well because at any moment we’re sitting and waiting for Alex to simply attack, and it’s these little moments this movie needed more of.

As the film approaches its end and a priest becomes involved in trying to help Alex, I couldn’t help but wish I never saw the ending.  I was having a good time with this, but the end just seemed like they ran out of ideas and picked out a couple movies to rip off and merged them together.  In the end I still have to say I had fun with this movie, but it could have been better if more originality had been injected into it.  If you’re looking for something fun as the Halloween season approaches, this is might be what you’re in the mood for.  Granted it’s not The Exorcist or TheOmen, but it’s certainly better than some other movies out there calling themselves horror films.

Brent Lorentson is a horror writer and film critic based out of Tampa, Florida. With a BA in Digital Film, he co-wrote and co-directed Scavenger Hunt. His short stories have appeared in various horror anthologies. In 2019 his short script Fertile Blood will be a part of the anthology horror film Slumber Party. He is currently working on his first novel A Dark and Secret Place set to be released in late 2019. Favorite Films: Taxi Driver, Fight Club, I Saw the Devil, The Wild Bunch, Dawn of the Dead, A Clockwork Orange, Pulp Fiction, Heathers, The Monster Squad, and High Fidelity.
The Babymakers (Blu-ray) James Bond Gadgets