Posted in: No Huddle by Archive Authors on September 17th, 2012 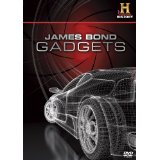 The History Channel likes to market some of its more popular shows on DVD. The series Modern Marvels had a winner in James Bond Gadgets. It certainly ties in with a James Bond movie collection.  This DVD has three sections, two of them devoted to the gadgets and a third from the Biography channel on Ian Fleming which adds up to over three hours of material.

The jet pack was an early favorite. This is remembered from the film Thunderball. The jet pack has been around for 35 years, and there is actually one that remains in use to this day and has been an uproarious addition to sporting events. A similar device is an auto gyro, which is a kind of one-man mini helicopter. A type of this vehicle was used in You Only Live Twice. There is a Q-Boat from The World Is Not Enough. The Aston Martin DB5 from Goldfinger. The BMW Z8 in The World Is Not Enough, which is cut in half in the film. The Lotus from The Spy Who Loved Me, which was a submarine car. The BMW 750 from Tomorrow Never Dies with dozens of defense systems. The Rolls Royce Phantom 3 from Goldfinger. The Aston Martin V12 Vanquish which is priced around $250,000 dollars and is one of the latest Bond cars. Then it shows modern spy devices that are actually used today and how they were inspired by Bond. Then we visit Special Tactical Services in Virginia which is a training complex for all kinds of elite weapons and equipment expertise. It includes every type of specialized training that will prepare an operative for anything unexpected in the field. The second program elaborates on the first with Acrostar Mini Jet and the Spiral Jump stunt and all sorts of Bond arcana.

The real gem of the set, though, is the third part, which is Biography’s detailing of the man behind Bond himself, Ian Fleming. It is an exciting story from start to finish. Ian Fleming was the model for Bond, but clearly revved up and energized. He came from a privileged background and had boundless confidence as he went through life, though somewhat pushed by his mother’s expectations. He definitely had long periods of strenuous womanizing. He was a spy. He was in fact one of the first and most influential spies during World War II.

The beginnings were fairly typical of British upper class. He had all the advantages. When his father was killed in World War I the mother took an iron hand. He went to Eton. He was a champion athlete. He was charming and popular but was somewhat full of himself. He flirted with careers in journalism and the stock market. He made enough to buy a bachelor pad in London that he quickly put to good use. Eventually he became enamored of Jamaica and bought a large property there. Interestingly, one of his neighbors there was Noel Coward. I say interesting because throughout this biography they show an obvious picture of Coward as if it were Fleming. They do it so often that the error becomes glaring. That aside, it shows that the exciting life Fleming had was easily translated into the feats of daring of James Bond. Overall, if you are fan of James Bond and have all the movies, this is an excellent addition to the collection. You know what they say, you only live once.