Posted in: No Huddle by Gino Sassani on September 21st, 2012 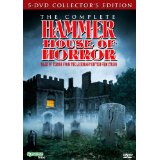 In the 1950’s and 1960’s Hammer picked up where Universal had left off. They became the studio for the very best in horror films. With names like Lugosi, Karloff and Chaney finally reaching the end of their reign, Hammer offered up the likes of Christopher Lee and Peter Cushing. They resurrected all of the famous Universal monsters in their own image. Now we had a new cycle of Dracula, Frankenstein, The Wolf Man and The Mummy. While the films were somewhat low-budget and released mostly through the drive-in circuit, these films made a bloody splash with horror fans all over the world. But by the time the 1970’s had begun, the studio was falling behind in the horror genre. Anthony Hinds had left the studio, and with him went some of the passion for the horror films that made Hammer famous. The studio heads became more interested in other kinds of films, and the horror department languished for a time.

During the final years of Hammer’s productions, they had branched out into television. Hammer’s House Of Horror was a horror anthology that was created in cooperation with American television in 1980. By then all of the Hammer greats had moved on, and the serialized creatures had run their course. For the television series the studio relied more on the old psychological thrillers they had churned out long before the creature features. The episodes retained the Hammer level of production and are the closest to mini-features that you’ll come across in horror anthologies.

Synapse resurrects these stories from the grave. It’s been a long time since these episodes have seen the light of day, and now here they are:

Witching Time: David Winter (Finch) is a film composer. His wife is away and having an affair with the couple’s best friend and family doctor (McCulloch). A sound from the barn brings him out in a storm to discover Lucinda (Quinn) disoriented in the barn. She claims to be a witch from the 17th century who has escaped her execution by coming forward in time. When wife Mary (Gee) returns home she finds she’s in competition with the witch for her husband whom she now discovers she actually loves. Lucinda is driving both of them insane.

The 13th Reunion: What does a shady funeral parlor, a fat farm, a feminist newspaper, and a tragic plane crash all have in common? They converge for reporter Ruth Cairns (Foster) is sent to investigate the weight-loss program. She stumbles upon a gruesome annual reunion of the plane crash survivors. Shades of Burke & Hare meet Guess Who’s Coming For Dinner.

Rude Awakening: Norman (Elliott) is a real estate agent who dreams of killing his wife and taking up with his attractive secretary. When he’s given the commission to sell an old estate house, he investigates the property. There he sees the corpse of his wife and an admonition that he should not have killed her. But he hadn’t, at least not yet. Was it a dream? Each day he goes through a brand new scenario that might all be a dream. Is he still dreaming when he actually kills his wife?

Growing Pains: Terence (Bond) and Laurie (Kellerman) Morton are so caught up in their own work and lies that they neglect their young son who poisons himself and dies. So what do they do? They adopt another young boy, James (Blakstad). The neglect continues, but this time the ghost of William (Reilly) isn’t going to take it lying down.

The House That Bled Death: William (Ball) and Emma (Davies) just bought a fixer-upper house. What they don’t know is that the previous owner killed his wife and chopped her into little pieces in that house. The spirit of the act begins to haunt the couple and their young daughter. The swords that were used for the dismemberment keep showing up in the oddest places.

Charlie Boy: An African fetish doll is the tool in a game of revenge. At first Graham (Lawson) doesn’t believe in the doll’s powers. But when people who cross him end up dead he believes…too late. It’s a case of be careful what you wish for and pay attention to the small details.

The Silent Scream: It’s the only episode to feature any of the classic Hammer great actors. Here Peter Cushing stars as a pet store owner who uses animals in an odd conditioning program. When he befriends a newly released convict, he decides to move on to human trials.

Children Of The Full Moon: If you read the title, it isn’t hard to figure out that we’re talking werewolves here. A stranded couple come upon an isolated estate where a woman is looking after several foster children. These aren’t your average foster kids, to be sure.

Carpathian Eagle: This is an insane episode that I found the worst of the bunch. An attractive girl is seducing men and then killing them in a ritualistic fashion. She cuts out their hearts.

Guardian Of The Abyss: An antique mirror is at the center of a Satanic cult and their intended sacrifice. It’s needed to help bridge the way to the other side.

Visitor From The Grave: Dark Shadows star Kathryn Leigh Scott stars as a woman just released from a mental ward. She must kill an intruder who tries to rape her. Her boyfriend insists that they cover up the incident rather than go to the police. It seems that the attacker doesn’t want to stay dead. Or is she just going crazy once again?

The Two Faces Of Evil: A stranger in a raincoat is given a ride by a family on holiday. But he attacks the father and causes a bad accident. When the father is finally released from the hospital, the wife isn’t sure if it’s her husband or the mysterious stranger.

The Mark Of Satan: This episode was only shown once in England and was not included in the American package or earlier video releases. It was considered too disturbing but is quite tame by today’s standards. A morgue attendant believes he has been infected with evil from one of the corpses. The episode has more number 9’s than a Beatles White Album.

Synapse includes all 13 episodes on 5 discs with a couple of interviews as extras. Each episode also has an informative introduction by Shane M Dallman. It’s a pretty nice little package that signifies the end of the original Hammer. It’s a wonderful English tradition. “Would you like some more tea?”

Gino Sassani is a member of the Southeastern Film Critic's Association (SEFCA). He is a film and television critic based in Tampa, Florida. He's also the Senior Editor here at Upcomingdiscs. Gino started reviewing films in the early 1990's as a segment of his local television show Focus. He's an award-winning recording artist for Omega Records. Gino is currently working on his 8th album Merchants & Mercenaries. Gino took over Upcomingdiscs Dec 1, 2008. He works out of a home theater he calls The Reel World. Favorite films: The Godfather, The Godfather Part II, The Body Snatcher (Val Lewton film with Karloff and Lugosi, not the pod people film), Unforgiven, Gladiator, The Lion King, Jaws, Son Of Frankenstein, The Good, The Bad And The Ugly, and Monsters, Inc.
October Baby (Blu-ray) Trouble With The Curve