Posted in: Disc Reviews by Brent Lorentson on September 21st, 2012 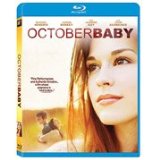 One of the first rules I’ve set for myself when writing reviews that I’ve managed my best to follow has been to avoid bringing up politics and religion.  After all, this is a site dedicated to cinema, but sometimes these topics are injected into the films we review, and like it or not it’s something I was bound to encounter at some point.  To simply spit it out, October Baby is a movie the tackles the subject of abortion and delivers a very pro-life message.  So for those of you who are very passionate about this topic, I mention this not to offend or start a debate but simply give a disclaimer.

When we first meet Hannah (newcomer Rachel Hendrix) it is just before curtain call, and she is nervously going through her lines.  She’s the star of the play, and it’s opening night.  All the seats are full, most notably by her parents and her friends, so of course it’s fair to say she has a case of the jitters.  But as the curtains rise, something is wrong as Hannah collapses on stage.  After numerous tests and  it is discovered it’s not just the stress of the show that got to her, but that she is sick and it is due to some complications surrounding her “birth”.

It’s in the doctor’s office that Hannah is given the news that her parents are not her natural parents but that she was adopted.  And if this were not shocking enough, it is revealed that she was an abortion survivor.  To be hit with just a portion of this news is understandably earth-shattering, but the combination of both is just something I can’t imagine anyone trying to cope with wrapping their mind around.  But to get some answers Hannah would have to travel 12 hours away to find the place where she was brought reluctantly into this world.

Her father ( Smallville’s John Schneider) doesn’t want Hannah traveling, fearing her health will only get worse as well as having concerns about what Hannah may discover.  But thankfully she has her childhood friend, Jason (Jason Burkey) to lean on.  Seeing how important finding her mother is to Hannah, Jason convinces Hannah to come with him and his friends on their trip to Mardis Gras where they plan on making a stop in Mobile, Alabama where Hannah can have a chance to find the answers she needs.

As the road trip begins, with everyone crammed together it’s clear everyone is happy to have Hannah along for the trip with the exception of Alanna (Colleen Trusler), Jason’s girlfriend.  Really, it’s kind of hard to not like Hannah, she’s your beautiful girl-next-door type who has a smile that can charm just about anyone; pile on her being sick and the news she’s discovered about being adopted and an abortion survivor.  It’s no wonder Alanna feels threatened by the presence of Hannah around her man.  In the deleted scenes we discover even more about Alanna’s resentment towards Hannah; thankfully this scene was cut because, well, it’s a tad unbelievable for me.  This resentment towards Hannah sparks an argument between the two girls, and Hannah decides to not burden the group and set off to find her answers on her own.

Because Jason is simply too nice a guy to let Hannah go about this venture on her own, he rents a car and the two head to Mobile on their own.  As the two bond over the experience, we’re given a montage of events that under the circumstances I just don’t buy, that they would be frolicking in the ocean and being so playful together being the loving couple they always should have been.  Sure, it’s beautifully shot and the music is well placed, but it just felt out of place.  But it’s only used as a simple plot device to give Hannah that moment of happiness before things of course can only get worse for her.

Once they reach their destination they discover the hospital where she was born has been closed.  Which begs the question, in the modern day of the internet couldn’t she have simply made a few phone calls and sent some emails before embarking on this little quest of hers?  Sure, it’s not as dramatic, but just think of the gas they could have saved and not having to deal with getting arrested.  Did I not mention she and Jason both get arrested for breaking into the hospital because Hannah is certain all the answers she’s looking for are going to be locked inside the abandoned hospital?

Where I continued to shake my head at this film was when Hannah tries to explain to an officer why she broke into the hospital and he’s overcome by her story and decides to help her out.  He’s not able to find her mom, but he’s able to track down the nurse who was there for the procedure and signed off on her birth certificate.  He’s so nice to hand over the woman’s last known address, and even better the two are cut loose without even a slap on the hand.  Sorry, but I’m more willing to believe in hobbits and dragons before believing a cop would ever do this.

With the address in hand Hannah and Jason track down Nurse Mary (Jasmine Guy). In her brief appearance Jasmine Guy delivers a great performance.  As Hannah sits and listens to this horrific story, the delivery is simply a powerful performance delivered by Guy, and it’s hard to not be at least a little moved by this story.  And that’s my problem with it, as a scene it stands alone and is brilliantly performed and directed, but put into this film it felt like I was being smothered by the message the filmmakers set out to make. I get it already.  Abortion is bad, life matters; can you please stop forcing this down my throat.

But the grip is never eased as we follow Hannah along as she goes to confront her birth mother.  By this point the movie just had me depressed, and watching even more bad news pile onto Hannah just had me feeling like I was watching emotional torture porn.  Sure, there are people that will love this movie and find it powerful and maybe even inspiring, but for me it was just simply trying too hard.  It wants to be a film in the caliber of The Notebook and A Walk To Remember,  but instead it just gets lost preaching a message that would have been more accepted with some subtlety instead of a punch in the face.

October Baby is presented in its original aspect ratio of 2.40:1.  The 1080p image is arrived at with an AVC MPEG-4 codec at an average of 30 MBPS.  The transfer here is beautiful and does justice to all the beautiful exterior shots throughout the film.  The only issue I noticed came when with a couple elevator scenes that seemed a little dark and muddy.  The flesh tones look nice.  The overall film has a beautiful soft look throughout. Often times I’ve noticed with films shot with the Red camera interior scenes just tend to lack the visual punch as the camera shines when dealing with exterior natural light.  But there is a scene in a chapel towards the end that looks great, and all the detail and edging looked beautiful.  This is a beautiful transfer for a very visually pleasing experience.

The DTS-HD Master Audio 5.1 delivers the dialog very clear and audible here.  In moments where a song kicks in for a montage, it does well in helping immerse us into the scene.  This was a very standard audio mix with no flash or bang considering this is a very talky movie.
Audio Commentary by the Erwin Brothers and the October Baby family: This was a nice informative track with the directors as well as numerous members of the crew and cast.  It’s nice hearing them all discuss their experiences on the film and getting some of the behind-the-scenes decisions made on the film.  This is the standout bonus feature that’s worth a listen-to especially if you’re a fan of the film.

October Bloopers: (5:00) Your standard blooper reel showing the cast and everyone having a good time while filming.

Deleted Scenes: (15:43) There are several deleted scenes here that do nothing but add fat to the film’s length.  There is a scene with Hannah speaking with her therapist, a conversation with Hannah debating with her father about going to New Orleans, and a few scenes that won’t be missed.  The standout cut scene that I mentioned above concerns Allana confessing to Hannah about an abortion she had a few years before meeting Jason.  I’m glad this got cut, because it’s just too much drama for this emotionally-stuffed film as is.

Finding Hannah (4:46) A short glimpse at how the directors decided on casting the role of Hannah.

Shari’s Story (4:55) This is the actress who plays Hannah’s birth mother and her reaction to the script.

Gianna Jessen: The Inspiration (5:08) An abortion survivor the directors heard speak and were so inspired they wanted to tell her story to the world.

Singing the Praises of October Baby (3:32) A collection of people in the Christian entertainment community patting the film on the back for being so inspiring.

Facebook Q & A with Rachel and Jason (6:24) A cute little Q&A with the stars asking each other questions fans asked from Facebook.

Every Life is Beautiful (14:12) A group of little PSA’s from the film makers and other artists giving their sentiments as to why they feel every life is beautiful.

This really had me hooked the first half, and I was smitten for the Hannah character from frame one, but as this film went on it just lost its entertainment value.  It’s a hard topic to tackle, and I commend the filmmakers for what they did.  It’s not every day a film comes along with a message that the creators are passionate about.  For me this was just a bit too heavy-handed; I’m sure there will be many who will appreciate this film but also many who will hate this film.  Either way I agree with the film makers this was a story that needed to be told and a topic to be discussed.

Brent Lorentson is a horror writer and film critic based out of Tampa, Florida. With a BA in Digital Film, he co-wrote and co-directed Scavenger Hunt. His short stories have appeared in various horror anthologies. In 2019 his short script Fertile Blood will be a part of the anthology horror film Slumber Party. He is currently working on his first novel A Dark and Secret Place set to be released in late 2019. Favorite Films: Taxi Driver, Fight Club, I Saw the Devil, The Wild Bunch, Dawn of the Dead, A Clockwork Orange, Pulp Fiction, Heathers, The Monster Squad, and High Fidelity.
Revenant Hammer House Of Horror – The Complete Series