Posted in: No Huddle by Brent Lorentson on September 21st, 2012 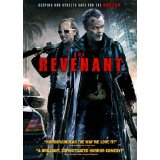 Revenant: one who returns from the dead in corporeal form

Back in 2009 when I was in Austin, Texas for the Fantastic Fest (a genre film festival they hold every year) I was lucky enough to catch this film  and it was one of the standout films of the festival.  Since that night I’ve been waiting and waiting for this to finally get a theatrical release, and now three years later The Revenant has finally found its way onto DVD.  With all the vampire and zombie films that have been released over the past few years ,it is still a mystery why it took so long for this film to find a wide release.  This isn’t your standard zombie or vampire film. This is a horror comedy that gives us genre fans something fresh and simply outrageous and awesome.

After Bart (David Anders) is killed in action, his body is returned to the states to be buried.  But the night of his funeral Bart comes back to life and manages to emerge from the grave and find his way back home.  Sure, this is traumatic for Bart; after all, when he looks in the mirror he sees his face suffering from the effects of decomposition.  Confused and scared, Bart does what he thinks is best, which is to go to his best friend Joey (Chris Wilde).  How this reunion is handled just felt spot-on for me with a mixture of joy and horror one should have under the circumstances.  The way the two go about trying to figure out how any of this is possible ,and most importantly how to quench Bart’s hunger without him spewing  black goo and decomposing, is fun.

Where the film breaks out from the mold and just becomes so fun and cool came with the decision that to survive Bart will only feed off criminals.  As Joey and Bart become a pair of vigilantes keeping the streets safe, it’s nearly impossible to not root for these guys.  Bart even manages to enjoy the role of the vigilante so much so that at one point when interrupting an attempted rape he approaches the would-be rapist while quoting Dirty Harry.

I’d consider this a bromantic horror comedy in the same vein as Shaun of the Dead and on the same par.  Between the solid script and the performances given by Anders and Wilde when we see Bart and Joey confront one another about mistakes each has made against the other, the betrayal stings.  With guns drawn and nowhere for either to go, you can believe these guys have been together all their lives through the good times and bad.  This is a duo I’d love to see working together again.

The thin line writer/director Kelly Prior walked between how dark this gets and the humor should be applauded.  There are some really grim moments throughout, and somehow you’ll find yourself laughing and chuckling about things you know you shouldn’t be.  Equally as grim was the decision to shoot LA in a not so flattering way, using locations that you could believe were crawling with criminal low-lives.  And the decision to go with using more classical music than trendy modern music was yet another choice that helped separate this movie from all the rest.

Coming away from this I’m looking forward to hearing other people’s responses to the film and what some of their favorite scenes are.  Is it the blood bank robbery, the head in the box, the apartment shootout, or one of countless other scenes?  Ten years from now I want to see how this film holds up.  This is one of the best horror films the world has had hidden from them for years, and now hopefully it will be picked up and enjoyed as it should be.  Watch it alone if you must, but this is the film you want to watch with a friend, and if you’re both horror hounds, well, you’re going to OD on this gory goodness.

Brent Lorentson is a horror writer and film critic based out of Tampa, Florida. With a BA in Digital Film, he co-wrote and co-directed Scavenger Hunt. His short stories have appeared in various horror anthologies. In 2019 his short script Fertile Blood will be a part of the anthology horror film Slumber Party. He is currently working on his first novel A Dark and Secret Place set to be released in late 2019. Favorite Films: Taxi Driver, Fight Club, I Saw the Devil, The Wild Bunch, Dawn of the Dead, A Clockwork Orange, Pulp Fiction, Heathers, The Monster Squad, and High Fidelity.
House at the End of the Street October Baby (Blu-ray)