Posted in: No Huddle by Gino Sassani on September 25th, 2012 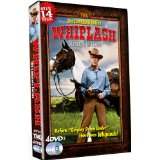 Not too long before he was heading Impossible Missions, Peter Graves spent a television season in Australia on the western series Whiplash. It was a traditional western in the sense that all of the standard elements were there. There were outlaws and saloons, posses and gunfights. What made this half-hour series stand out was the genuine Australian locations. The show was filmed in the Outback and was even aired on Aussie television. The locations gave the show a unique backdrop and a scenic look that certainly set it apart from the many American westerns on television at the time. Rivers were filled with crocodiles and even sharks. Instead of Indians there were Aborigines.

Graves played Christopher Cobb, an American who started the first stage coach line in Australia. The part was actually based on the real person, but any similarities likely ended with the name. Just like in America, Cobb had to deal with an unforgiving frontier, bandits, and the usual characters who would seek to hire him. His lead driver was Danny (Wickert), who was also a pretty good draw with his gun. But guns weren’t the only weapons used in this western. Look for whips and boomerangs to fly from time to time.

The series only lasted a single season, managing a healthy 34 episodes. Cobb would often find himself trying to help the cause of justice, or sometimes just a little girl looking for her Daddy, lost out in the bush. Because of the half-hour format expect stories to be wrapped up very quickly. Guest stars consisted of many well-known Aussie actors, but most of the people Cobb encountered happened to be American. Graves gives himself a hearty Aussie accent in a couple of episodes where he’s attempting to pass as a native. His performance is what sells the series, but it never did quite catch on with the American audiences.

Now Timeless Media has brought these episodes out of oblivion, and they’re well worth a check if you’ve never seen the show. Unfortunately, most of you have never even heard of the series until now. “Now that’s a problem I can fix.”

Gino Sassani is a member of the Southeastern Film Critic's Association (SEFCA). He is a film and television critic based in Tampa, Florida. He's also the Senior Editor here at Upcomingdiscs. Gino started reviewing films in the early 1990's as a segment of his local television show Focus. He's an award-winning recording artist for Omega Records. Gino is currently working on his 8th album Merchants & Mercenaries. Gino took over Upcomingdiscs Dec 1, 2008. He works out of a home theater he calls The Reel World. Favorite films: The Godfather, The Godfather Part II, The Body Snatcher (Val Lewton film with Karloff and Lugosi, not the pod people film), Unforgiven, Gladiator, The Lion King, Jaws, Son Of Frankenstein, The Good, The Bad And The Ugly, and Monsters, Inc.
End of Watch The Best of Ancient Aliens (Blu-ray)