The Best of Ancient Aliens (Blu-ray)

Posted in: No Huddle by Gino Sassani on September 25th, 2012 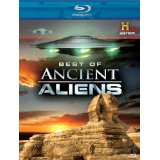 “Ancient monuments precisely aligned to celestial events. History written in stone honoring otherworldly rulers. And a calendar accurately predicting shifts in the Earth’s axis every 26,000 years. Did the Mayans of Central America really create one of the most advanced civilizations of ancient times? Or did their intelligence originate somewhere else? Perhaps out of this world.”

Ever since Eric von Daniken released his speculative book and its subsequent 1970 film Chariots of the Gods, there has been an entire field of study created around something commonly called Ancient Astronaut Theory. The idea is that extraterrestrials have visited many of our ancient civilizations. The theory continues that these visitors had a hand in shaping our development, whether it be through technology or even manipulation of our very DNA. These believers point to a world of evidence to support their claims. There are tons of images from earlier civilizations that could certainly be interpreted as depicting modern devices, concepts, or even space men. There is plenty of speculation that some of the knowledge and accomplishments of these peoples could not have been possible without some outside interference. There are even those who believe that aliens best explain our religious beliefs, and that God himself was/is an extraterrestrial being. Whatever your own beliefs on the subject, there are certainly some fascinating points to be made. There is no question that the speculations and observations bring up some interesting queries that deserve our attention. This series attempts to document much of this evidence and the beliefs these findings have inspired.

I’m not exactly sure that there was a tremendous call for it, but A&E/History have put together a single-disc Blu-ray of Ancient Aliens Greatest Hits. It includes just four episodes.

From season one we have The Evidence. This episode pretty much sets up the premise that has been carried forward by the series and the lineup of regular commentators. It’s a quick hodgepodge of some of ancient civilization artifacts that, if you look just sideways enough, in low light, without thinking too much, you just might see evidence of alien influence in the greatest civilizations in Earth’s history.

From season two comes Mysterious Places. Hotspots like the Bermuda Triangle are visited here, all with connections to UFO sightings, mysterious disappearances or phenomenon and, of course, ancient alien visitors.

From season three comes Aliens And The Old West. Here we encounter an old 1800’s grave reported to contain the body of an alien. Indian paintings appear to depict guys in spacesuits. It’s the gunfight at the not-so-OK corral with our normal commentators.

From the fourth season comes the only episode not already available on home video. The Mayan Conspiracy looks at the ruins in Central America and displays the same open-to-interpretation images we’ve seen from other locations. One such stone carving shows a ruler in the underworld, but our guys believe he’s clearly in the cockpit of a space capsule working its controls. One guy calls him the original Rocket Man. Paging Elton John and William Shatner.

Of course, there is speculation on that famous calendar, and you should be able to pretty much guess where it’s all going.

As much as I generally like A&E/History releases, this one has me scratching my head. You kind of either love the show or not. If you do, you already have three of these episodes, and the fourth will certainly be on the next season release. Why does anyone believe there’s a market for just four episodes on Blu-ray? “Undoubtedly a result of alien influence.”

Gino Sassani is a member of the Southeastern Film Critic's Association (SEFCA). He is a film and television critic based in Tampa, Florida. He's also the Senior Editor here at Upcomingdiscs. Gino started reviewing films in the early 1990's as a segment of his local television show Focus. He's an award-winning recording artist for Omega Records. Gino is currently working on his 8th album Merchants & Mercenaries. Gino took over Upcomingdiscs Dec 1, 2008. He works out of a home theater he calls The Reel World. Favorite films: The Godfather, The Godfather Part II, The Body Snatcher (Val Lewton film with Karloff and Lugosi, not the pod people film), Unforgiven, Gladiator, The Lion King, Jaws, Son Of Frankenstein, The Good, The Bad And The Ugly, and Monsters, Inc.
Whiplash: The Complete Series Let Go