Posted in: No Huddle Reviews by Gino Sassani on September 26th, 2012 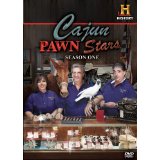 “I’m Jimmie DeRamus. Folks call me Big Daddy. My family’s been in Louisiana since before the Civil War. Today we run one of the largest pawn shops in the South. Where I live there’s no such thing as business as usual. I’ll buy and sell anything. And by that I mean anything.”

The formula worked for the guys in Vegas for several years, and it’s still bringing in a solid number of viewers. Like any successful series, someone decided that two shows would be twice as good. Someone was wrong.

Certainly, the premise for Cajun Pawn Stars is basically the same. The family owns a pawn shop, and in each episode people bring in their items to sell or pawn. As usual, most folks have a rather inflated idea of what their items are worth. That’s pretty much where any comparisons with Pawn Stars can safely be made.

There are, however, many considerable differences. In the original show almost everyone was selling. Here we do get a much larger population of folks doing an actual pawn. I’m sure that this has everything to do with the locations. Vegas is a transient town with plenty of tourist traffic. Alexandria, Louisiana is an obviously small community. Many of the people coming in are regulars. On such customer is “Joker” who provides the comic relief much as Chumlee does on the original. He’s a local picker who visits the shop several times a week, and the workers pretty much consider him a pest. Another difference can be found in the shops themselves. The Vegas shop is huge and rather fancy for a pawnshop. This place looks like it could use several coats of paint and a good contractor. Finally, this pawn shop accepts animals. Just these first episodes see donkeys, bees, and goats brought in for pawn or sale. They own a huge farm where they can keep the animals and care for them.

Of course, the real difference is the cast of characters. The owner is Jimmie, who claims everyone calls him Big Daddy. Not once in these first episodes will you hear anyone use the term. He’s got the whole Louisiana accent and charm going, but little else. There’s none of the stature or charisma that Rick Harrison has. He’s too quiet, and the negotiations never have the intensity that the original show has. Next up is Jimmie’s brother Johnnie. Again, he’s about as interesting as drying paint. Daughter Tammie rounds out the family of owners. She’s pretty quiet and sneaks through with an offer from time to time, but little else.

It’s a case of Pawn Stars Lite. I don’t think the Harrisons are sweating any bullets in Vegas about this show taking over the franchise. Still, there is interest in the items that happen to come in. The customers are also a bit more entertaining here. You have some Deep South folks, but the show really is making fun of them. I’m not sure the show is going to be the pride of Louisiana. “We’re just too far apart on this one.”

Gino Sassani is a member of the Southeastern Film Critic's Association (SEFCA). He is a film and television critic based in Tampa, Florida. He's also the Senior Editor here at Upcomingdiscs. Gino started reviewing films in the early 1990's as a segment of his local television show Focus. He's an award-winning recording artist for Omega Records. Gino is currently working on his 8th album Merchants & Mercenaries. Gino took over Upcomingdiscs Dec 1, 2008. He works out of a home theater he calls The Reel World. Favorite films: The Godfather, The Godfather Part II, The Body Snatcher (Val Lewton film with Karloff and Lugosi, not the pod people film), Unforgiven, Gladiator, The Lion King, Jaws, Son Of Frankenstein, The Good, The Bad And The Ugly, and Monsters, Inc.
Indiana Jones – The Complete Adventures Terra Nova