Posted in: No Huddle by Gino Sassani on September 26th, 2012 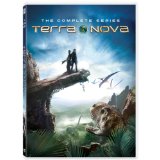 “At the dawn of the 23rd century the world is on the verge of environmental collapse. Mankind’s only hope for survival lies 85 million years in the past.”

Terra Nova was the show we were all excited for almost two years before we ever saw an episode. Who couldn’t be excited? We were talking Steven Spielberg and dinosaurs. It was going to be Jurassic Park on television. If anyone could deliver the goods week in and week out, it was going to be Steven Spielberg. Suddenly, a series two years out had begun to grow large expectations. When the premiere date kept being moved, we didn’t see it as the usual sign of development trouble. We saw it as Spielberg wanting to get it right. He wanted it to be perfect. So as each delay left us ever more hungry for a show we hadn’t ever seen before it was growing fat in our imaginations. You know what I’m talking about…expectations.

It’s the year 2049, and the planet has pretty much had it. You need a breather in order to go outside because the air is so bad. No one has seen the moon or stars in years. In fact, no one has even seen the sunlight in decades. Population is controlled by a strict law of only two children per family. Unfortunately, the Shannons have broken that law and are trying desperately to hide their third child. Of course, they get busted, and Jim (O’Mara) ends up hitting the enforcement officer and is sentenced to a decade in prison. Meanwhile his wife Dr. Elisabeth Shannon (Conn) has been offered a new life for her and their two legal children Josh (Liboiron) and Maddy (Scott). A time rift has been discovered that leads back to 85 million BC. It’s a one-way trip and a chance at a new life for the few selected and a collection of lottery winners. The catch for Shannon is she can’t take her husband or illegal child Zoe (Mansour). But she has a plan. She arranges for Jim to break out of prison, grab their daughter, and stow away on the pilgrimage through the fracture to 85 million BC.

Enter the world of Terra Nova. It’s run with military precision by Commander Taylor (Lang). It’s a circular community behind a huge fence to protect from the rather large and hostile wildlife. Jim ends up proving himself and as an ex-cop becomes the town’s sheriff under Taylor. You’d think law and order wouldn’t be such a big problem. But it’s not just the creatures that threaten Terra Nova. There are a group of anarchists who came on the 6th Pilgrimage and have broken away from the colony. They have weapons and are run by the fearless Mira (Adams). They have an agenda and a link to 2049. There is an interest that wants to make the portal both ways and use it to strip 85 million BC of its resources. They already know it’s an alternate timeline and feel they can rape the world without hurting 2049. Of course, Taylor and the Shannons will fight to protect their new home…their second chance.

If you were tuning in to see dinosaurs, you were likely rather disappointed. Yes, there are many of the creatures in the show, but they are used sparingly throughout the 13-episode run. There are some quite dramatic scenes involving the creatures, and when they are on screen they’re usually impressive….for television. But, this is no Jurassic Park, and these effects have the necessary limited budget of television. The show concentrates on the human elements and threats. It’s actually a good idea if not for those pesky expectations. The show needed to develop these relationships and create its own drama without relying on special effects all the time. It’s the only decision that could give a show like this a chance. It was the smart move and makes the series more interesting than it would have been if it were merely a dinosaur encounter of the week. It succeeds. The characters and the drama are often quite compelling. But all I heard from disappointed fans was about how disappointed they were that there weren’t more and better dinosaurs. In the end expectations killed what could have been a pretty good show if it had been able to continue to develop.

The cast includes Stephen Lang from Avatar delivering the same speech and character from that film. He’s dynamic and is a driving force in the human drama of the series. Television veteran Jason O’Mara does a good job as Jim. Young Alana Mansour steals the show as the young Zoe. It’s a solid cast that never got the chance to find their legs.

The series does have incredible production values. I would have really rather seen this in Blu-ray. The limitations of DVD do nothing to do justice to the hard work and care of the production design here. The story is filled with a ton of mythology that makes it very much like a Lost. Fortunately, many of those questions will be answered. The final episode is considerably rushed in story development. Too much happens too fast with unsettling leaps in logic and continuity. They obviously tried to give the fans some closure. I’m not sure they really provided any satisfaction, however. I suspect left at its own pace things would have been much different.

There is still talk that the show runners are shopping it around to other networks. I don’t see that really working out. All but the die hard fans have moved on to something else. “We should enjoy this while we can.”

Gino Sassani is a member of the Southeastern Film Critic's Association (SEFCA). He is a film and television critic based in Tampa, Florida. He's also the Senior Editor here at Upcomingdiscs. Gino started reviewing films in the early 1990's as a segment of his local television show Focus. He's an award-winning recording artist for Omega Records. Gino is currently working on his 8th album Merchants & Mercenaries. Gino took over Upcomingdiscs Dec 1, 2008. He works out of a home theater he calls The Reel World. Favorite films: The Godfather, The Godfather Part II, The Body Snatcher (Val Lewton film with Karloff and Lugosi, not the pod people film), Unforgiven, Gladiator, The Lion King, Jaws, Son Of Frankenstein, The Good, The Bad And The Ugly, and Monsters, Inc.
Cajun Pawn Stars: Season 1 Secret Access: The Presidency