Posted in: No Huddle by Brent Lorentson on September 27th, 2012 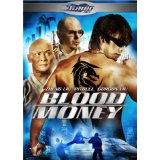 When I first got this DVD with my stack to review I treated it like I do with most films; I go in with little to no expectations, and whatever the result is at least I can’t be left too disappointed.  I love action films, and I’m a big fan or martial arts films, so when I see the name Gordon Liu in the credits, well, I at least know I have a little something to get excited about.  After all, Liu kind of has a cool pass in my book since doing The 36th Chamber of Shaolin movies. But to deliver a good movie, you need more than just an appearance by a martial arts legend, and really that’s all Blood Money brings to the table.

The plot consists of members of the Columbian crime family trying to move a couple tons of cocaine. The move is a little complicated since it has stops in Miami and Australia, then eventually it should make its way to Hong Kong for the Triads to do with as they please as soon as the Columbians get their money.  The drug dealers/kingpins are throwing around numbers that just are too unreal.  Really, one dealer apparently fetched over 700 million in one year?  Where are these guys when Forbes is putting out their magazine with most successful business leaders?  I’m sure these guys make some good money, but this just seemed too fairy-tale for my taste.

What pained me most was how the head of the Columbian cartel, Esteban (Alex Castro) does business.  To call him hotheaded would be an understatement, considering every place he seems to go to make deals he leaves bodies behind.  Wouldn’t you think when negotiating deals where hundreds of millions of dollars are to be exchanged, a little business professionalism would show instead of him acting like a poorly educated street thug? But this is only a fraction of what is wrong with the film; to make matters worse it is filled with over-stylized action scenes that not only left me bored but were simply laughable.

Our anti-hero is a strung-out hit man, Zhou (Zheng Liu) that the Triads bring in to help rescue a girl that is kidnapped by the Columbians.  The kidnapping is thought to be used as leverage for making the drug deal later on.  Now Zhou isn’t your normal everyday hit man considering he has some top-notch gear which mainly consists of special sunglasses that tell him who to kill and a handful of nails to kill people with.  When we see Zhou put these nails to the test at a pool party, it’s kind of cool, but still looks silly, and what results is an underwater shoot-out that to put it simply was ridiculous.

By the time Zhou is finally getting around to killing the Columbians, it was hard to even care about what was going on in the film.  By now the Columbians are trying to kill Zhou since he’s been taking out the Columbians one by one, so they bring in the Australian drug guys. The Australian drug dealers are hard to take seriously since they are nothing more than a group of bikers whose leader is nothing more than a buffoon with a glass eye that he taunts people with.  But seeing Zhou dismantle the biker gang had some enjoyable moments.

So where does Gordon Liu fit in to all this?  Well he really doesn’t, since he’s just there to sort of remind us that Zhou was trained by the Shaolin monks, though this is never even really made all too clear.  Most of the film is in English, and when Liu spoke it was all phonetically from the looks. I suppose this was a film he did to help pay some bills and not for the art of the craft.  As for Zheng Liu who people are trying to market as the next Martial Arts star,let me just say I watched some of his videos on YouTube and the guy has got skill, but there are many others he’s going to have to defeat to reign as the new martial arts king of the screen.  Though seeing him break pieces of steel over his head is pretty sweet.

Overall this was a work of style, no substance, and forgettable.

Brent Lorentson is a horror writer and film critic based out of Tampa, Florida. With a BA in Digital Film, he co-wrote and co-directed Scavenger Hunt. His short stories have appeared in various horror anthologies. In 2019 his short script Fertile Blood will be a part of the anthology horror film Slumber Party. He is currently working on his first novel A Dark and Secret Place set to be released in late 2019. Favorite Films: Taxi Driver, Fight Club, I Saw the Devil, The Wild Bunch, Dawn of the Dead, A Clockwork Orange, Pulp Fiction, Heathers, The Monster Squad, and High Fidelity.
Battlefield America Strippers Vs. Werewolves (Blu-ray)