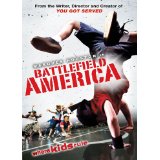 If the phrase “You got served” only conjures up images of wait staff or a notice to appear in court, then Battlefield America may not be for you. The film comes “from the writer, director and creator of You Got Served” — the hip hop-flavored dance drama that became a modest hit in 2004 — but offers up a child-centric twist. For fans of You Got Served, the best way to enjoy this inferior film may be to pretend the dancers in that movie were tragically shrunk down to kid size.

Sean Lewis (Marques Houston) is a successful and arrogant agent at a Los Angeles marketing firm. After celebrating a professional victory, he gets busted for DUI and sentenced to perform 120 hours of community service. His lawyer gets him a supposedly cushy gig working at an inner-city community center run by the impossibly attractive Sarah Miller (Mekia Cox). Sarah tasks Sean with teaching a group of misfits how to dance in preparation for the prestigious Battlefield America dance battle. (At least we learn the title refers to the competition and not a misguided sequel to Battlefield Earth.) The fact that Sean can’t dance and hates kids (of course he does) doesn’t seem to matter to anyone.

As we watch Sean clash with — and eventually win over — the tough-talking kids, the film mostly ditches its dance drama roots to become an extremely poor man’s version of The Bad News Bears. (Or The Mighty Ducks. Or even Hardball. Heck, Sister Act 2: Back in the Habit.) I mean, there’s even the one kid with the parent who thinks he’s wasting his time with ­­­_____ and should be focusing on school.

It’s too bad because the film opens with a truly electrifying dance sequence that becomes less impressive once it’s clear Stokes doesn’t have too many tricks up his sleeve. (It’s too bad: the talented dancers deserved better.) The quick-cutting, unimaginative battles are all filmed from the same low/center angle and occasionally feature that world-shaking camera effect when a dancer hits a particularly hard move. Sean names his squad the Bad Boys and puts them on a collision course with the rival Bang Squad, the three-time defending champs. (Even in the end, it seemed like Bang Squad was at least three times better than the Bad Boys, but that’s just me.)

I can’t tell for sure whether Stokes knows how ridiculous this movie is, but the best argument for self-awareness is the character of Hank “The Shockwave” Adams (Christopher Michael Jones), the adult leader of Bang Squad. The bleach blond poser walks around acting like the leader of Cobra Kai and says things like “This ain’t a battle…this is war” with a straight face. In other words, I wish he’d been in the movie a lot more.

For a while, it’s kind of amusing to watch Sean act like a total jerk to the father figure-craving kids and Houston plays the cocky jackass well enough. The main problem is, since Sean can’t dance, he’s forced to hire an instructor to actually work with the kids. As a result, the crucial relationship between Sean and the Bad Boys feels sort of secondhand because he is mostly relegated to treating the kids to dinner and giving clichéd speeches about not giving up.

So as the helpful Community Service Countdown Clock inches closer to zero and Sean has to decide between his high-paying career and supporting the kids, it’s hard to get invested in this supposed “conflict.” Of the kids, only Tristen M. Carter (as de facto leader Eric) stands out in any way, but he’s the only one who gets to play more than one dimension. The rest of the young cast’s acting was pretty painful. (Except for the mute kid: for some reason, I liked him.)

Stokes’s idea of making a kiddie version of You Got Served isn’t a terrible one. Unfortunately, the Long Beach street dance culture portrayed in the film — including PG-13 brawls and a drug overdose — doesn’t really lend itself to kid-friendly re-telling. The result is a film that feels too sanitized to be authentic.