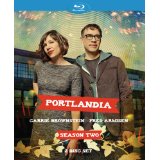 Oregon may have been the 33rd state to join our union — and Portland may be its most populous city — but Portlandia is a state of mind. And according to the surreal IFC sketch series created by stars Fred Armisen, Carrie Brownstein and director Jonathan Krisel, that state of mind is happily stuck in the simpler time represented by the ’90s.

Armisen and Brownstein co-star in almost every sketch, and each segment lasts no more than five minutes. That shrewdly gives the audience multiple opportunities to laugh within one episode even if a particular concept isn’t working or is too bizarre. (One especially painful skit consisted of Armisen and Brownstein repeatedly calling out “Sacagawea!” Thankfully, it was over relatively quickly.)

The duo wears a wide variety of wigs and costumes to play a wide variety of quirky personalities, including aggressively non-conformist bike messenger Spyke, overly-prepared nature enthusiasts Kath and Dave, and feminist bookstore owners Toni and Candace, who are probably the show’s breakout characters. Armisen and Brownstein also occasionally appear as “Fred” and “Carrie” — slight variations on their real-life personas — and clearly aren’t afraid of a little cross-dressing. (Though Armisen doesn’t look half as good as The Kids in the Hall when he’s dressed as a woman.)

Armisen’s German/Japanese/Venezuelan descent has allowed him to play a great range of characters during his extended stint on Saturday Night Live and that versatility serves him incredibly well in Portlandia. Brownstein, best known as a member of indie punk band Sleater-Kinney, has also proven to be an incredibly talented comedic actress. These two are almost always on screen together and it’s obvious they’ve been on the same comedic wavelength for a long time. Krisel — who previously directed episodes of Tim and Eric Awesome Show, Great Job! (another satirical sketch series) and SNL Digital Shorts — brings a cinematic quality to the proceedings. He makes each episode look like an indie film with the rhythm of a cool music video rather than a traditional sketch show filmed on a soundstage with a live studio audience.

At first glance, Portlandia can come off as a couple of too cool for school comics making fun of simple folk. Brownstein grew up in the Pacific Northwest — born in Washington, but currently lives in Portland; Armisen started hanging out with her there and fell in love with the city — and the show is filmed in Portland (and often in regular people’s houses). Since the city doesn’t have as big of a showbiz base as Los Angeles, Portlandia also features a high number of local non-actors. I’ve always thought the best spoofs/parodies feature some level of affection for the material being spoofed/parodied. Armisen and Brownstein make fun of Portland, the same way you or I would bust one of our family members’ chops.

Season 2 of Portlandia featured 10 episodes (up from six in season 1) and also attracted an eclectic group of guest stars, including Jeff Goldblum, Eddie Vedder, Kristen Wiig, Edward James Olmos, Penny Marshall, Greg Louganis, Tim Robbins and Steve Jones of the Sex Pistols. Kyle MacLachlan — who is as associated with the Pacific Northwest as any actor thanks to his iconic performance in Twin Peaks — merrily reprises his recurring role as the cheery Mayor of Portland.

Standout episodes included “Mixologist” (Andy Samberg guests as a smug bartender, and Fred and Carrie take a harrowing trip to SoCal), “No Olympics” (Fred and Carrie discover the Olympics are just an arty version of sports; the Mayor sings Portland’s anthem), “Brunch Village” (Portlandia’s only episode with one unifying storyline brings back most of the season’s minor characters in one long restaurant line) and the Battlestar Galactica-themed “One Moore Episode” (which explores the dangers of marathoning a great TV show on DVD). But really, there’s something to laugh at in each episode.

Since a lot of the skits take bizarre twists and have only a loose, loopy continuity, the humor can often seem completely random. In fact, the opposite is true: Portlandia’s targets are hyper-specific, with a big emphasis on middle class self-indulgence. As a result, you’ll find skits poking fun at parents obsessed with getting their kids in the best preschool, bad tattoos as deal breakers, people who violently latch on to bands “before they were cool”, overly generous motorists and the horrors of forgetting to bring your tote bag to the grocery store.

So despite the show’s peculiar sensibility — and the fact that I’m personally on the opposite end of the country — the comedy in Portlandia is surprisingly accessible.

Portlandia – Season Two is presented in its original aspect ratio of 1.78:1. The 1080p image is arrived at with an AVC MPEG-4 codec at an average of 13 mbps. As I mentioned before, the series is filmed on location in Portland and the city really is the third main character (after Fred and Carrie). Portland looks lovely in this transfer, but it isn’t exactly the sunniest city in the world. As a result, the colors in this presentation don’t exactly pop. Then again, they’re not really supposed to and I admire the faithfulness of the somewhat muted palette.

Though the contrast is a bit inconsistent, black levels are solid and we get an impressive amount of detail and texture during the many outdoor scenes. All 10 episodes are on Disc 1 (the special features are on Disc 2), but I didn’t spy any compression issues. In short, Portlandia looks better than shows working with infinitely bigger budgets.

The Dolby Digital 2.0 Stereo track is quite good in delivering the dialogue and punch lines, but ultimately a letdown for a show that uses music so well (and is created by a pair of musicians). Simply put, a minimum 5.1 mix should’ve been required to bring us all the aural nuances in the show. That being said, the existing track is adequate and provides a decent amount of immersion during certain skits. However, a standard Dolby track is just not good enough for a show with this much going on in the sound department.

Portlandia The Tour: Seattle: (3:20) Fred and Carrie — with help from guests Kyle MacLachlan and Dan Savage — put on a live version of their show in Seattle (including an appearance from Women and Women First owners Toni and Candace) and play some tunes. I actually could’ve done with a bit more material from this show.

Inside Portlandia: (22:39) This great behind-the-scenes doc is a must-watch for any Portlandia fan. It explores Armisen and Brownstein’s musical roots — Fred was a drummer for punk band Trenchmouth — and their platonic, undefined relationship. (The characters of “Fred” and “Carrie” on the show are likened to Bert and Ernie. Do they live together? Are they sexually involved or just friends?)

The duo talks about starting their Thunderant site and making strange short films that were the equivalent of jamming in a basement. Exec producer Lorne Michaels admits he approached Portlandia as something that would be interesting, rather than successful or unsuccessful. Brownstein sums up the appeal of Portland by saying it’s a place where creativity and imagination are still favored over money. We also get a look at some of the non-actors who make up the cast. (Sam Adams, Portland’s real mayor, plays the fictional mayor’s aide on the show.) Krisel points out the show’s title comes from being set in a utopian version of Portland.

“Brunch Village” The Director’s Cut: (45:03) Kyle MacLachlan (not in-character, but still stately and goofy) introduces this extended edition of the season finale. The actual episode is only about six minutes longer than the 22-minute final cut (mostly featuring a storyline with a pretty girl standing in line who faints because she hasn’t eaten in 10 days). The rest of the time is filled with a tongue-in-cheek doc focusing on the episode’s tumultuous final day of production. (Somewhere along the line Chef Bobby Flay gets involved.)

Fred, Carrie and Jonathan Krisel commentary: The trio offers commentary on “Mixologist”, “One Moore Episode”, “Cool Wedding” and “Brunch Village” (Episodes, 1, 2, 3, 10). It’s fun to watch them point out all the different ways they re-use settings and minor characters. Brownstein says her favorite characters are Kath and Dave and jokes about all the strangers’ beds she climbed into while filming various scenes in real homes.

Excerpt from the new book “Portlandia: A Guide for Visitors”: Interactive feature highlights an in-character passage from the “Women and Women First” FEMzine, which includes a recipe for Vegan Birthday Cupcakes. (Yum?)

Portlandia is the result of a group of incredibly creative people poking fun at subjects near and dear to their hearts. The show, however, is not quirky just for the sake of being quirky…it’s quirky for very specific reasons.

Season 2 is an improvement over the first season — if only for the instant classic “One Moore Episode” — but I also realize Portlandia is not for everyone. I personally can’t wait to see what Fred, Carrie and Co. have in store for season 3.