Posted in: No Huddle by Brent Lorentson on October 9th, 2012 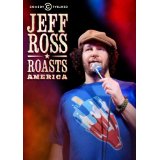 Best known for his appearances on the Comedy Central Celebrity Roasts, Jeff Ross sets off on a cross-country quest to roast America in his new comedy special.  Aside from his appearances on the roasts, I was not familiar with Ross or his stand-up act.  Some may best describe him as rude, perhaps even offensive, but personally, I think the guy is hilarious. To kick off his tour we get to see Ross backstage with his family, and it just so happens that it is his nephew’s birthday, which makes him the first victim of the numerous speed roasts that are to follow.  Considering how little he held back with his own family, it came as no surprise to hear some of the many offensive jokes that were to follow.

What made this special stand out the most from the standard stand-up releases is that we actually are given glimpses of what life is like on the road.  It’s too bad we didn’t get more of this; he’s actually a personality I could see people finding engaging to watch.  At a stop in Washington DC we get to see Ross give an impromptu speed roast on the steps of the Lincoln Memorial.  Some may find it in poor taste, but he still had a few zingers for the former president that got a few chuckles out of me.

At another stop in Minnesota we get to see a reunion with the woman who took Ross’s virginity.  She’s brought up on stage where the two share an awkward, yet amusing recollection of the events that took place.  It’s the moments like this, where he breaks away from the standard stand-up mold that made this DVD a better than average viewing though the run time on this was considerably shorter than I expected.  But thankfully this DVD came with some extras, and it’s in this section where fans are rewarded.

For the tour Ross would spend a portion of his routine doing the standard stand-up act, but for the later portion of each of his acts he would bring up volunteers from the audience for what he called a “speed roast”.  It’s in the Bonus section of the DVD where we get to witness the full unedited speed roasts from three of his stops on the tour.  These brave souls who ventured to the stage deserve applause for the insults they took for a good laugh.  But in the end that’s what I think makes Ross a little special.  He understands the need for someone to be able to laugh at themselves and not take themselves too seriously.

Brent Lorentson is a horror writer and film critic based out of Tampa, Florida. With a BA in Digital Film, he co-wrote and co-directed Scavenger Hunt. His short stories have appeared in various horror anthologies. In 2019 his short script Fertile Blood will be a part of the anthology horror film Slumber Party. He is currently working on his first novel A Dark and Secret Place set to be released in late 2019. Favorite Films: Taxi Driver, Fight Club, I Saw the Devil, The Wild Bunch, Dawn of the Dead, A Clockwork Orange, Pulp Fiction, Heathers, The Monster Squad, and High Fidelity.
“31 Nights Of Terror” Exclusive Interview With Darren Lynn Bousman Director of The Barrens and Saw II, III and IV Demetri Martin: Standup Comedian