“31 Nights Of Terror” Exclusive Interview With Darren Lynn Bousman Director of The Barrens and Saw II, III and IV

Posted in: Podcasts by Gino Sassani on October 8th, 2012 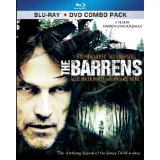 Some horror directors just start out with a bang. That’s certainly the case in point for Darren Lynn Bousman. He directed Saw II, III and IV to start his career. He’s also responsible for the remake of Mother’s Day and the quirky cult favorite Repo! The Genetic Opera. This time around it’s True Blood’s Stephen Moyer in The Barrens. I had a chance to chat with Bousman last week. Check out what he had to say. Bang it here to listen to my talk with Darren Lynn Bousman

Gino Sassani is a member of the Southeastern Film Critic's Association (SEFCA). He is a film and television critic based in Tampa, Florida. He's also the Senior Editor here at Upcomingdiscs. Gino started reviewing films in the early 1990's as a segment of his local television show Focus. He's an award-winning recording artist for Omega Records. Gino is currently working on his 8th album Merchants & Mercenaries. Gino took over Upcomingdiscs Dec 1, 2008. He works out of a home theater he calls The Reel World. Favorite films: The Godfather, The Godfather Part II, The Body Snatcher (Val Lewton film with Karloff and Lugosi, not the pod people film), Unforgiven, Gladiator, The Lion King, Jaws, Son Of Frankenstein, The Good, The Bad And The Ugly, and Monsters, Inc.
The Best Exotic Marigold Hotel (Blu-ray) Jeff Ross Roasts America