Posted in: No Huddle Reviews by Brent Lorentson on October 10th, 2012 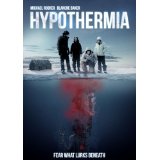 Ever since I first saw John Carpenter’s The Thing, I’ve had a soft spot for movies that take place in cold, snowy climates.  I’m guessing it’s because living in Tampa, there is little to no chance of seeing the white stuff.   Frozen was the last chiller-thriller that had me grimacing at the sight of what frostbite can do. So when I saw the title Hypothermia I figured it was time to crank up the A/C and warm up some Swiss Miss, because I was ready to check this movie out.The Pelletier family is heading out for a weekend of ice fishing; this has been a yearly tradition for as long as the family can remember.  But with David (Benjamin Forster) about to finish school, he and his girlfriend Gina (Amy Chang) have plans to volunteer in Africa, which means this could be the last ice fishing trip they’ll have together, as a family. Ray (Michael Rooker), David’s father, couldn’t be any more proud of his son, so they decide to make this family trip the best it can possibly be.

It’s at this point they begin to realize something isn’t right with the lake and the fish are not biting.  To put another kink in the family’s relaxing trip, Steve and Stevie Jr. decide to come out and do some fishing themselves, while annoying the Pelletier family with their loud music and roaring engines from their snowmobiles.  All this noise ends up attracting the attention of a large creature that is lurking beneath the ice.

I’d imagine you can figure out what happens next, but just in case you’re still in the dark on how a monster movie works…The lake monster starts picking off the victims one by one.  Trapped inside a trailer, in the middle of the lake, it’s decided the family won’t head for shore till daybreak. All they have to do till then is manage to survive.  But surviving turns out to be more difficult than expected.

The tricky thing about making a monster film is that you have to give the viewer something unique and equally terrifying. When the viewer sees the monster, and at least one of these requirements isn’t met, then your movie is in trouble.  Sometimes the creature design simply doesn’t work, and the film makers have to switch gears and cross their fingers that showing less will make a greater impact.  Unfortunately, for Hypothermia, it suffers from having a weak creature design that with every appearance I grew to hate more and more.  All I could think of is, “So that’s what would happen if the Creature from the Black Lagoon mated with a penguin.”

Sadly this was not the only flaw for the film.  It suffers from the egregious error of also being boring.  The decision to spend so much time with the family as they ice fished was a tragic mistake.  Michael Rooker may not be the greatest actor of our time, but when given the right material he’s more than capable of delivering a solid performance. (In case you forgot how fun he can be to watch, take a look at Henry: Portrait of a Serial Killer, Slither, or even The Walking Dead.)  But instead they gave him the blandest and most subdued character Rooker has brought to the screen.

In the end this is just a movie that will be forgotten and lost in the shuffle.  If you were hoping for a good monster film, I’m sorry, but this simply doesn’t deliver even the slightest chill.

Brent Lorentson is a horror writer and film critic based out of Tampa, Florida. With a BA in Digital Film, he co-wrote and co-directed Scavenger Hunt. His short stories have appeared in various horror anthologies. In 2019 his short script Fertile Blood will be a part of the anthology horror film Slumber Party. He is currently working on his first novel A Dark and Secret Place set to be released in late 2019. Favorite Films: Taxi Driver, Fight Club, I Saw the Devil, The Wild Bunch, Dawn of the Dead, A Clockwork Orange, Pulp Fiction, Heathers, The Monster Squad, and High Fidelity.
French Connection – Signature Series (Blu-ray) “31 Nights of Terror” Chained