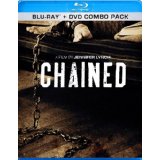 Director Jennifer Lynch’s camera winds its way through a dingy house with tragically outdated décor during the opening moments of Chained. It’s almost as if the filmmaker is encouraging the audience to get nice and cozy with this depressing setting because we’re going to be spending a lot of time here.

Thankfully, we don’t spend nearly as much time in that sad hell hole as poor little Tim. The nine year old boy (Evan Bird) and his mother (Julia Ormond sporting a busted American accent) are abducted by Bob (Vincent D’Onofrio), a cab-driving serial killer who targets women and takes the two of them back to his house.

Eventually, Bob forces young Tim to become his servant/slave and starts calling him Rabbit. As if that wasn’t dehumanizing enough, Rabbit is restricted by a chain around his ankle after a failed escape attempt. As the years go by and Rabbit (now played by Eamon Farren) continues to serve Bob dutifully, the killer decides to make the young man his protégé. After having spent more time with Bob than with his own family, will Rabbit follow in the serial killer’s footsteps?

The plot of Chained is strongly reminiscent of 2010’s Bereavement, another story about a child who is kidnapped by a killer and forced to witness brutal acts of violence against women. Lynch — daughter of Oscar-nominated provocateur David Lynch — has a distinct style and has proven to be perfectly capable of creeping us out in her own right. Simply reading the synopsis for Boxing Helena, her feature film debut, might make some people squirm. Lynch revisits some of the themes from that earlier film, including the twisted bond between a kidnapper and his long-time victim.

D’Onofrio has always been a towering, off-kilter presence on screen, so he’s the perfect choice to play a psychotic brute who overpowers women and children. (I meant that previous sentence in the nicest way possible.) Though D’Onofrio’s performance is suitably unsettling, it’s not always exactly clear how crazy Bob is supposed to be. For the most part, he appears completely volatile and unhinged, but he’s also wily enough to keep tabs on Rabbit with a nanny cam. Bob seems (conveniently) just sane enough to keep Rabbit from escaping.

The actor is matched quite well by the two performers who play Rabbit. I probably preferred Bird’s feistier portrayal to Farren’s sunken-cheeked performance because the latter reminded me too much of Robert Pattinson, but they were both solid. The transition between the two Rabbits is quick and effective. Meanwhile, if you’re looking for a portrayal of strong women you’ve made a horrible mistake. So many women are brutalized here that I felt like I was watching Criminal Minds: The Movie. Still, the fact that women are shown in such a humiliating and unflattering light makes sense within this story because Bob himself views them as less than human and wants to pass that attitude down to Rabbit.

Jake Weber (Medium) also appears as Tim’s dad, but the film is mostly a two-character piece between Bob and Rabbit. (I can easily imagine this story on a stage.) For the early part of the film, the camera tends to hang back a bit and we mostly see just the aftermath of Bob’s killings. As the story progresses and Rabbit becomes more familiar with Bob’s methods, it’s no accident that the movie becomes noticeably bloodier. (Chained was originally tagged with an NC-17 rating before being trimmed down to earn an R.)

We’re talking rape, torture (mental and physical), throat slittings and incest. (In other words, fun for the whole family!) I really wished the movie didn’t feel the need to explain Bob’s psychosis until I saw how his back story tied into the film’s ludicrous final act. Either way, Chained is (for better and for worse) a truly nasty piece of work.