The Mentalist: The Complete Fourth Season 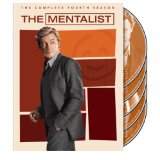 “Mentalist: Someone who uses mental acuity, hypnosis, and/or suggestion. A master manipulator of thoughts and behavior.”

This time around Baker stars as Patrick Jane, a psychic who was riding high bilking folks out of their hard-earned money by playing on their desires to contact their deceased loved ones. He would justify his con as providing closure for his marks and never looked back. That is, until one day he makes a fatal mistake. He never fooled himself into believing any of it was real. He wasn’t psychic. He just paid close attention. While working with the police to solve a serial killer case, he arrogantly demeans the murderer, known as Red John, on a television show. It was all chuckles until he gets home and finds that he made Red John so angry that he killed his wife and young daughter. Now he’s driven by guilt and a desire to avenge his family’s death. He abandons his con game and decides to use the observational skills that allowed him to play a psychic to assist the California Bureau Of Investigation, a sort of state-based FBI, to solve murders. He’s not a cop, but consults with a tough-crimes division that answers directly to the state’s Attorney General. As he puts it, “No gun. No badge. They don’t even give me dental.” While he’s shed his psychic persona, Jane is still incredibly full of himself. Jane is also deeply disturbed, although he hides it well. He still sleeps in the bedroom where his wife and daughter were killed. He never covered the red smiley face Red John drew at his crime scenes to taunt him in the victims’ own blood. A little Helter Skelter meets Barney.

Simon Baker is one of those actors who never appear to be working very hard at all. Like his Guardian character, he plays Jane as somewhat softspoken; incredibly arrogant, but softspoken. His movements often appear slow-motion and deliberate without much effort. He never seems to waste a movement. He fits the role extraordinarily well, because his presence is so disarming and almost hypnotic by itself. I’m still not quite sure if the actor has much of a range, but when a part fits, it does so snugly. And The Mentalist fits.

The supporting cast is also quite good here. I can’t say I’ve warmed up to fellow lead Robin Tunney as Agent Lisbon. She runs the team, but it’s an awkward character. It’s likely not Tunney’s fault at all. She has to be light, yet in charge of what’s going on around her. She does not share a very good chemistry with Baker. Fortunately, the rest of the cast more than makes up for her deficit. Tim Kang as Agent Cho and fellow Brit Owain Yeoman play the junior officers in the team. They work well together and carry most of the office banter stuff. Amanda Righetti is excellent as the newest member of the team, agent Grace Van Pelt. She shares the best stuff with Baker and offers one of the more compelling characters on the series. I find her acting the direct opposite of Baker’s, and it works so well. While he is reserved, she is passionate and puts herself out there in every situation. It’s a good collection of characters and actors overall.

The season starts with Patrick in a very bad situation. As you may recall, he finished the last season by shooting a man he believed was Red John. He did it in a mall food court with a few thousand witnesses. Of course, we know he’ll find a way out of the jam and back with his partners at the CBI. The big story here is that he soon believes he did not get Red John, and so the hunt is once again back on. It’s another smart season with Simon Baker again at his best. It ends with Patrick apparently falling under the spell of Red John and willing to do his bidding.

There are a couple of deleted scenes, but the only extra here of any note is a feature with real cops who compare the show to the real thing. They go through a character profile of the main folks and tell us what kind of cops they’ve worked with in the past just like them.

The series continues to do very well in the ratings and with good reason. You might say, “We live in a target rich environment, my friend.”

Gino Sassani is a member of the Southeastern Film Critic's Association (SEFCA). He is a film and television critic based in Tampa, Florida. He's also the Senior Editor here at Upcomingdiscs. Gino started reviewing films in the early 1990's as a segment of his local television show Focus. He's an award-winning recording artist for Omega Records. Gino is currently working on his 8th album Merchants & Mercenaries. Gino took over Upcomingdiscs Dec 1, 2008. He works out of a home theater he calls The Reel World. Favorite films: The Godfather, The Godfather Part II, The Body Snatcher (Val Lewton film with Karloff and Lugosi, not the pod people film), Unforgiven, Gladiator, The Lion King, Jaws, Son Of Frankenstein, The Good, The Bad And The Ugly, and Monsters, Inc.
Bonanza: The Official Complete Fourth Season French Connection – Signature Series (Blu-ray)