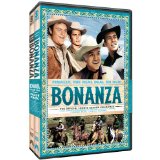 The show would see a lot of characters come and go over the years, but the fourth season saw the original cast pretty much intact. There were some classic episodes and moments to be found. In The Quest, Joe wants to show that he can run things without the help of his brothers. Ben gives him the task of supplying timber to a lumber company, but before long Joe’s very happy to have the help of his brothers. Hoss is arrested for bank robbery by an overzealous sheriff who is trying to prove himself. It’ll mean a hangin’ if the truth doesn’t win out in A Hot Day For A Hanging. Adam finds himself in close quarters with a killer during a storm in The Way Station. A young lady is fascinated by the murderer, and Adam finds himself in a difficult situation. Joe and Adam find themselves on opposite ends of the Civil War movement in The War Comes To Washoe. In Knight Errant Hoss is sent to pick up his friend’s mail-order bride. Things get complicated when the woman falls in love with Hoss instead. Hoss is injured in The Decision. It’s a matter of life or death, and the only doctor is about to be hung for murder. It’s 12 Angry Men in The Jury. Hoss is the lone holdout on a jury. Hoss is once again the subject of a false murder charge in Half A Rogue. This time he’s being framed by the convict who stole his horse. Hoss is hit on the head and suffers from amnesia in A Stranger Passed This Way. When an Italian immigrant comes to the ranch, Hoss befriends one of the sons. He’s in trouble when he unwittingly convinces the boy to give up his career in classical music for the cowboy life. If it looks like Hoss gets all the best stuff, it’s because he does.

The set includes a skit with Lorne Green and Dan Blocker in their show roles. There are some vintage Chevy ads and plenty of production photographs. The two sets are sold separately, but you can find deals on the full season. Together you get 34 episodes on 9 discs. Join the Cartwright family for yet another trip into the golden age of television Westerns. You can watch one of those imitation Westerns, or you can spend some quality time with the Cartwrights, which “is a dang sight more pleasurable.”

Gino Sassani is a member of the Southeastern Film Critic's Association (SEFCA). He is a film and television critic based in Tampa, Florida. He's also the Senior Editor here at Upcomingdiscs. Gino started reviewing films in the early 1990's as a segment of his local television show Focus. He's an award-winning recording artist for Omega Records. Gino is currently working on his 8th album Merchants & Mercenaries. Gino took over Upcomingdiscs Dec 1, 2008. He works out of a home theater he calls The Reel World. Favorite films: The Godfather, The Godfather Part II, The Body Snatcher (Val Lewton film with Karloff and Lugosi, not the pod people film), Unforgiven, Gladiator, The Lion King, Jaws, Son Of Frankenstein, The Good, The Bad And The Ugly, and Monsters, Inc.
Courier, The (Blu-Ray) The Mentalist: The Complete Fourth Season