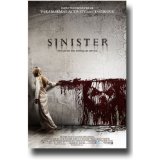 “Bad things happen to good people, and they deserve to have their stories told.”

I have to say that the horror film market has disappointed me of late. With October in full swing, I expect to be exposed to all kinds of horror films, from unknown independent projects to the standard franchise entries that pop up every year around this time. The trouble is that the films I’ve seen at the theaters so far have either been very disappointing or not really horror films at all. Thankfully, Sinister is not disappointing, and it is a straight-out horror movie in the tradition of films like The Ring.

Ellison Oswalt (Hawke) is a true crime writer in the tradition of Truman Capote. His In Cold Blood was a book called Kentucky Moon, and he’s been ridding that success for a decade or so. Each of his subsequent books have been panned by critics and have only served to make him very unpopular with police departments. Now he’s chasing another unsolved crime in a small Pennsylvania town. He moves his family to the town of the crime to do his research and write his new book. What he neglects to tell his family is that they’ve not only moved into the same town, they’ve moved into the house where the crime occurred. Not sure how he expected to keep that a secret for very long, but he manages to carry it out for too long to be believed.

A family was taken into the back yard and hung from a tree. One of the children, a young girl, was not found with the murdered family and is still missing. Ellison finds a box of super-8mm home movies in the attic that not only show this crime but several others that go back to 1966. In each case a family was killed by some bizarre means, and one of the children turns up missing. He becomes obsessed with the footage, which leads him down a dark path to a kind of insanity. He begins to see glances of a sinister face in the films that leads him to believe they are connected. Of course, he’s correct, but he figures out how they are connected too late to keep his family from being the next in line.

Finally, a film that sets out to really only do one thing…scare you. There’s not a lot of show-off art here, and the film doesn’t overthink itself in an attempt to be cerebral or fancy. That isn’t to say that there isn’t a good deal of style here. The 8mm films are a very nice touch. They add a wonderful sense of atmosphere to the mood of the film and offer us a direct link with the supernatural elements at play here. The grainy, dark images reflected from a sheet on the wall become a believable window into another reality. If you’ve ever seen old 8mm films projected, they always look creepy. It doesn’t matter if they’re from Disney World, they look absolutely…well…sinister. You’ll be sucked into the horrible images. If there is a flaw at all in the technique, it’s that some of the images are used a bit too often. The hanging scene is one of the creepiest, but it does lose some of its effectiveness after the 648th time we see it. While we never get a very good explanation of how this evil force started or why it functions in the way that it does, it’s unnecessary. We’re told exactly what we need to know to keep us traveling down this demented garden path.

The cast is anchored by a pretty solid performance by Ethan Hawke. He sells the descent into madness quite nicely. He starts off a bit unbelievable, but the character improves the deeper he goes into the celluloid looking glass. There are a few laughable moments like the time he takes a baseball bat to confront an unknown noise or intruder. Another little-used but highly effective performance is turned in by the two children. Ashley (Foley) has some kind of connection with the missing girl and demonstrates it through a series of wall paintings in her room. She’s subtle in her performance, and that hits just the right formula to make her few scenes so effective. Trevor (D’Addario) suffers from night terrors and finds himself in places like the back yard and in a moving box. It’s really not connected to the story, but it serves for two of the films jump scenes. It also serves as just another pressure on Ellison and his steadily decreasing hold on sanity. Senator Fred Dalton Thompson delivers a nice “cameo” as the local sheriff. James Ransone delivers much of the film’s comic relief as a deputy who is looking to get a mention in the book acknowledgements. Ellison calls him “Deputy So snd So” based on the deputy’s attempt to get the mention. I actually thought this relationship would be developed more than it was. I’m disappointed that it wasn’t.

The film is a refreshing new take on the found-footage fad. For once we have a film that focuses on the guy who actually finds the found footage. The footage itself has the shaky camera and other familiar aspects. But here it’s creepy, and it’s another human who is processing the material. I’d like to see more of this approach, for sure. There’s a good bit of subtle humor and more than a few shots at the current state of filmmaking. There’s a wonderful shot at the alternative/extended endings from those home video releases that’s priceless.

It all falls at the feet of director Scott Derrickson. His resume up to this point has been rather suspect. He directed the remake of The Day The Earth Stood Still and a really bad Hellraiser sequel. But he also delivered on The Exorcism Of Emily Rose. If he can keep his eye on the atmosphere and continue to tell a scary story, we have something to look forward to. His pacing here is nearly flawless. Just as we’ve had enough of the footage or a jump, he moves us in another direction. Sure, in the end it’ll remind you of The Ring with a little Paranormal Activity thrown in. Is that such a bad thing? A fellow reviewer remarked that the Paranormal Activity thing appears about ready to spend itself out this year. We both agree this might be something that’s just ready to pick up the baton. “I gotta really good feeling about this.”

Gino Sassani is a member of the Southeastern Film Critic's Association (SEFCA). He is a film and television critic based in Tampa, Florida. He's also the Senior Editor here at Upcomingdiscs. Gino started reviewing films in the early 1990's as a segment of his local television show Focus. He's an award-winning recording artist for Omega Records. Gino is currently working on his 8th album Merchants & Mercenaries. Gino took over Upcomingdiscs Dec 1, 2008. He works out of a home theater he calls The Reel World. Favorite films: The Godfather, The Godfather Part II, The Body Snatcher (Val Lewton film with Karloff and Lugosi, not the pod people film), Unforgiven, Gladiator, The Lion King, Jaws, Son Of Frankenstein, The Good, The Bad And The Ugly, and Monsters, Inc.
Argo “31 Nights of Terror” Jeff Dunham: Minding the Monsters (Blu-ray)