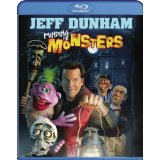 “I thought this was a family show.”

“Well, it depends on your family.”

Quick, who is the highest-grossing stand-up comic in America? Well, if you follow the live comedy scene — or you can’t help but notice you’re reading a review for one of his shows — you probably know the answer is Jeff Dunham. The man has single-handedly made ventriloquism cool again. (Pause.) Well he’s made it astoundingly lucrative, anyway.

Dunham became a superstar thanks largely to Comedy Central specials like Arguing with Myself and Spark of Insanity. His latest effort, the 80-minute Minding the Monsters, arrives just in time for this month’s spooky festivities and finds four of his most popular characters getting into the Halloween spirit.

But first we have to watch Dunham do a 15-minute bit about his dogs and his childhood that is, at best, only loosely related to Halloween. Minding the Monsters was filmed in Savannah and the show gets off to an eye-catching start with Dunham coming to life while strapped to an electric chair. The Texan is an affable presence on stage during his solo material — only one tossed off f-bomb slips out — but I think it’s fair to say everyone in the audience (and those of us watching at home) came to see “the guys in the suitcases.”

Up first is Walter, the cranky old man with the perpetually furrowed brows and crossed arms. Walter is one of my favorite characters, so I was delighted to see him come out dressed as Frankenstein’s monster (Crankenstein!) and deliver his signature brand of pessimistic humor. The long-married Walter saves his harshest barbs for the freshly-engaged Dunham. I should mention that each character’s appearance is preceded by schlocky, well-made video intros that pay tribute to classic horror films.

The Savannah crowd seemed to be into Bubba J, the dim-witted redneck, a lot more than I was. Bubba J was dressed as Dracula (“I want to suck your beer”), but I enjoyed the material about his lack of intelligence more than all the repetitive jokes about getting drunk.

Peanut, the spastic purple puppet creature, came out next dressed as Batman…excuse me, Batnut. Peanut’s personality — other than being hyper — isn’t as clearly defined as Dunham’s other characters, so the party-loving puppet randomly blurted out “Ooh-ah! Ooh-ah!” to fill empty spaces. However, when Peanut and Dunham were joined on stage by Jose Jalapeño on a Stick (and an additional surprise guest), the comic pulled off his most impressive technical feat as he seamlessly juggled multiple characters. Jose was dressed as Batnut’s sidekick Robin (excuse me, Ruben) and the duo lobbed insults at each other with Dunham playing the referee/straight man, which is a better role for the comedian than being on stage by himself.

He wisely saves the best for last by closing the show with Achmed the Dead Terrorist, the controversial character that launched the comic’s career into the stratosphere. Achmed appears (cross)dressed as the scariest thing he can imagine: an American woman. (“They can vote.”) In fact, the only thing I didn’t like about Achmed’s appearance is that it was shorter than everyone else’s. Or maybe it just felt that way.

Dunham is a very clever guy — it’s no accident that the strongest characters are showcased first and last — and his technical mastery and ability to embody different personas as a ventriloquist is unimpeachable. The Blu-ray’s “Scene Selection”/”Pick a Character” option helpfully allows you to go directly to your favorite, which mirrors the way a lot of people consume Dunham’s comedy on YouTube.

It’s a good thing because watching a few of his routines back to back makes you realize Dunham re-uses a lot of the same un-PC jokes and stereotypes — mostly about Mexicans, Southerners and wives — and the only thing that changes is the voice he uses to tell them.

Jeff Dunham: Minding the Monsters is presented in an aspect ratio of 1.78:1. The 1080i image is arrived at with an AVC MPEG-4 codec at an average of 21 mbps. The real standouts here are the intentionally lo-fi video vignettes that precede the comedy special and introduce each character. The black and white and heavy grain effects are a little over the top, but I suspect the filmmakers were going for comedy over authenticity. The stand-up special itself has solid black levels — there’s a distinct difference between the black on Dunham’s suit and the darker parts of the stage set-up — as well as nice sharpness and texture on each puppet.

The Dolby TrueHD 5.1 track lets you choose between a “Bleeped” or “Unbleeped” version. (I went with “Unbleeped”, but Dunham only occasionally works blue, so I can’t imagine the “Bleeped” version will be incredibly disruptive.) The jokes come through clearly through the speakers, which is the most important thing. The only time the track does any sort of heavy lifting is during those pre-taped packages or when Dunham takes the stage with a new character. The creepy music and thunderclap sound effects are extremely loud and a bit muffled.

All of the bonus material is presented in HD. The makers of the menu had fun with this one as one character remarks, “Special Features? More like, ‘Let’s fill up the DVD with crap!’”

Creating Crankenstein: (8:40) An informative look inside Dunham’s workshop — and the surprisingly high-tech methods he used to create Walter’s costume — a month before filming the Minding the Monsters special.

Monstrous Mistakes: (5:57) We see Dunham trip over his own words a few times during the special, but this bonus feature shines a bright light on those flubs and a few technical issues. It’s impressive how quickly the comic recovers and rolls with the mistakes (with help from the supportive audience).

Tour of Terror: (5:31) Dunham give us a tour of the “coolest set I’ve ever had.” He gives a shout-out to the production designers and the people who created the props. This special feature is useful since we don’t get to explore too much of the set during the show.

Minding the Miniatures: (13:04) Inside the filming of the pre-taped opening segment. (A “Here lies Monty” gravestone refers to a dummy Dunham used in junior high.) He talks about combining his love of building his own dummies with recent advances in technology.

Frightening Photos: (2:21) We drop in on the photo shoot for the Minding the Monsters Blu-ray cover. This special feature isn’t at all necessary, but at least there’s time for an ice cream break.

Monster Movie Magic: (26:17) A behind-the-scenes look at the production of the short films that accompany the stand-up special. Dunham tried to build the mini haunted house that opens the show, but eventually ran out of time and bought a completed one instead. Also features a photo shoot with Dunham and his fiancée Audrey for a spooky portrait that hangs on the set during the stand-up routine.

Audio Commentary: Dunham is joined by Matt McNeil (who directed the video segments) and Kelly Asbury (who wrote a book on ventriloquists and is the co-director of Shrek 2). Not surprisingly, the trio mostly focuses on the production of the pre-taped vignettes and all the hidden gems within the set of the live show. A lot of this stuff is covered in more detail in the rest of the bonus material.

I touched on this a bit earlier: Dunham is a very talented guy, but I think his comedy is better suited to YouTube-size segments. When you watch him over an extended period of time, you notice he goes back to the same politically incorrect well too many times to tell too many of the same jokes. Then again, nobody in the audience seemed to mind.

And that’s where Dunham’s true genius lies. The man knows exactly what his audience wants, and he’s been giving it to them for the better part of the last decade. The terrific bonus material on this Blu-ray also reveals that he is incredibly hands-on with regards to every aspect of his stand-up act. I come away more impressed by his savvy, work ethic and technical ability as a ventriloquist than I am by his chops as a comedian.

If you’re a fan — and there’s obviously a lot of you out there — you’re going to want to give this one a look.