Posted in: Expired Contests by Gino Sassani on October 15th, 2012 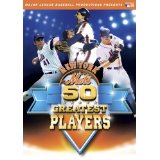 It’s baseball playoff time again. If you’re a Mets fan it might have been a disappointing year for you. Our friends over A&E have something to cheer you up. They’ve given us three copies of New York Mets 50 Greatest Players to give away to a few lucky upcomingdiscs readers. The disc includes interviews with some of the team’s historic greats. A blue-ribbon panel selected this list of players. See if you agree.

Gino Sassani is a member of the Southeastern Film Critic's Association (SEFCA). He is a film and television critic based in Tampa, Florida. He's also the Senior Editor here at Upcomingdiscs. Gino started reviewing films in the early 1990's as a segment of his local television show Focus. He's an award-winning recording artist for Omega Records. Gino is currently working on his 8th album Merchants & Mercenaries. Gino took over Upcomingdiscs Dec 1, 2008. He works out of a home theater he calls The Reel World. Favorite films: The Godfather, The Godfather Part II, The Body Snatcher (Val Lewton film with Karloff and Lugosi, not the pod people film), Unforgiven, Gladiator, The Lion King, Jaws, Son Of Frankenstein, The Good, The Bad And The Ugly, and Monsters, Inc.
“31 Nights of Terror” Borderlands 2 (Xbox 360) “31 Nights of Terror” Spongebob Squarepants – Ghouls Fools

Contest: Win The Avengers: Endgame On Blu-ray From Marvel/Disney