Posted in: Disc Reviews by William O'Donnell on October 15th, 2012 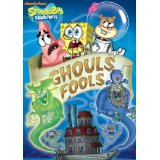 There have been numerous DVD releases of Spongebob episodes that are linked together by a theme. Holidays are obvious choices and Halloween is an inevitable choice for any series that has multiple seasons under their belt. As expected as it may be, that does not dampen the loony fun that comes along with Sponebob.

Spongebob Squarepants is the children’s show that seems geared more for the college-age crowd than toddlers. This is not a revelation in cartoons, but I feel like this particular DVD set emphasizes this fact about Spongebob more than previous DVD releases of this show. The zaniness translates to all ages (just as it has from Tex Avery right through Ren & Stimpy) but this particular assembly of episodes displays some unnerving imagery that younger viewers may not be able to appreciate as much as older ones. Yes, there are subtle jokes spliced in that kid’s will not catch (such as Spongebob’s best friend Patrick explaining that looking at clouds helps to calm his “inner demons”), which is perfectl harmless, but it might be a bit much for someone just entering grade school to see Spongebob’s eyes melt before bursting into a pile of spiders or being infested with the ghosts of snakes. Such imagery, to me, is a testament to how little concern this show for being stricly for youngsters, and how much it wants to be lapped up by that media hungry 14-30 crowd.

There are seven episodes on this particular release; one of which being double-length. The episodes selected for this collection span from 2000-2011 so it certainly saves owners of the complete seasons a lot of disc changing if you want to keep things SPOOKY.

For further reading on Spongebob, as covered by other reviewers on this site, check out these links:

Full Screen. As mentioned in previous reviews, the Nickelodeon treatment is a generally spic-and-span one. It’d not HD but there are no issues with haze.

Dobly Digital Stereo available in English. Everything sounds very clear. The silly sounds and occasional chord strikes in the score are mix well together and have plenty or presence.

I know I ranted about this being catered a little more to teens than toddlers, but this is still acceptable for your little ones if you’re looking for a fun bit of slapstick for the Halloween season…just don’t expect it to be very educational…