“31 Nights Of Terror” After Dusk They Come

Posted in: No Huddle by Brent Lorentson on October 16th, 2012 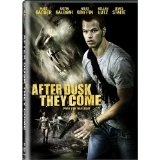 This is a film that’s been floating around for some time but under the title The Forgotten Ones.  A simple title change isn’t going to help this film.  The worst part of this train wreck is that it had every chance to be a really good film.  I wish the blame could only go to one person, but there are issues with the illogical script, the direction, the camera work, the editing, and even the sound.  The only things that helped make this film even bearable to watch was the cast (who didn’t have much to work with) and the makeup effects for the creatures was impressive (considering the budget). When we first meet the group of friends, everyone is meeting up at the marina, ready to set sail for a three day tour out in the open water.  Liz (Jewel Staite, Firefly) is helplessly in love with Peter (Justin Baldoni) despite the fact he’s lied and cheated on her in the past.  He seems to have changed his ways and committed to Liz, but still she can never be too sure. Also along for the three-day voyage is Ira, an overweight buffoon who somehow is wealthy enough to score Lauren, the stereotypical gold-digger.  Thankfully, to balance out this awkward double date there is another deckhand along for the cruise, Jake, who just so happened to date Lauren at one point in time.  Yeah, the movie at first plays out like a bad episode of (insert random tween-friendly show on the CW), but don’t worry, it manages to shift gears and get worse.

After the boat crashes into some rocks, everyone on board ends up washing up onto shore.  With their radio they call in for a rescue, but with the coordinates they give from the GPS there is no land anywhere near where they claim to be.  Things get stranger for the group as Liz begins to see things in the surrounding jungle.  It would appear the survivors washed up onto the shore that is something of a mix from Dr. Monroe and Lost, only not nearly as interesting.

It doesn’t take long before the islands inhabitants’ begin to pick off the group one by one.  What worked for the film are the apelike creature effects.  It’s nothing on par with the new Planet of the Apes films, but for an indie horror film these creatures look pretty cool.  I dig how they stick to the trees while hunting and when they attack, it’s with the right amount of ferocity that it gives the creatures a more animal like presence.  Too bad the sound FX during the kills ruin everything the attacks had going for them.  At times the sound doesn’t even seem to sync with the action on the screen.

But the problems get worse.  As though the filmmakers knew what kind of film they had on their hands, they take it to a lower level, throwing in fart sounds at a couple points.  The one I’m certain of, at another section I can’t be certain, but regardless, the crassness of the scene was on par with a Farrelly brother’s film, and I don’t mean this in a good way.

There are just so many issues, and simply no need to go any further.  If there was ever any doubt to how bad this movie is, the fact that the producers reshot the entire film with a revised script and cast should tell you something.  But for those hoping for anything much better, apparently The Lost Tribe (the remake) is said to be just as bad.

Brent Lorentson is a horror writer and film critic based out of Tampa, Florida. With a BA in Digital Film, he co-wrote and co-directed Scavenger Hunt. His short stories have appeared in various horror anthologies. In 2019 his short script Fertile Blood will be a part of the anthology horror film Slumber Party. He is currently working on his first novel A Dark and Secret Place set to be released in late 2019. Favorite Films: Taxi Driver, Fight Club, I Saw the Devil, The Wild Bunch, Dawn of the Dead, A Clockwork Orange, Pulp Fiction, Heathers, The Monster Squad, and High Fidelity.
Wall Street (Filmmakers Signature Series) (Blu-ray) Holliston: The Complete First Season (Blu-ray)