Posted in: Disc Reviews by Brent Lorentson on October 17th, 2012 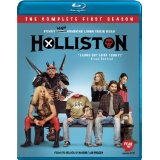 When I first learned that Adam Green (director of Hatchet and Frozen) would be creating a show to air on Fear Net, this seemed like a slice of heaven to me.  I love horror, and with the exception of The Walking Dead and American Horror Story there just hasn’t been much to watch from the genre.  So when I discovered that Green was going to be actually developing a sit-com instead, it would be fair to say I was more than a little disappointed by this news.  But then I was given a glimmer of hope when I heard it would be about a pair of struggling horror filmmakers. As a film graduate and a lover of horror, this instantly became something relatable to me.

The first season for Holliston consists of only six episodes and is a bit of a mixed bag for me.  As I mentioned above, it’s about two friends, Adam (Adam Green) and Joe (Joe Lynch) who film bad local TV commercials as well as share hosting duties on their cable horror show.  The two are working at getting a trailer made to help get funding for their first big feature Shinpads.  The guys are simply looking for that big break that will get them out of their home town of Holliston and get their movies up on the big screen.  Every episode is filled with horror references, which fans of the genre should enjoy, but don’t be mistaken, this isn’t horror at all.  In fact the show has a lot of heart in both the romantic as well as the bromantic form.

The show also gets into the broken relationship between Adam and his ex Corri (Corri English).  She’s now back in town after being away for years, and though Adam still has his heart set on Corri, she has moved on but still wants to remain friends.  And rounding out the core four of the cast is Laura (Laura Ortiz), Joe’s cute, ditzy, but lovable girlfriend who is also an artist.  The four together have a lot of natural chemistry together and are fun to watch, especially when they are all gathered in the same scene.

One of the show’s highlights is Dee Snyder (Twisted Sister) who plays an eccentric, struggling, glam rock cover artist, Lance Rockett, who is also Adam and Joe’s boss.  He’s fun and goofy to watch but can be hard to take seriously in some of his glam rock costumes he’s always wearing.  And rounding out the cast is Oderus Urungus (Dave Brockie from GWAR) who plays Adam’s imaginary best friend who lives in his closet.  He’s always around to give the wrong advice and is there for a good laugh.

In one of the more amusing episodes we see Adam and Joe stuck in a bathtub after being sprayed by a skunk, and since they only have one tub they have to soak together.  Another one of the highlights comes when the gang goes to a horror convention, and their plan is to meet John Landis and pitch their movie to him.

Throughout the season several celebrities who should be familiar to fans of the horror genre make appearances. Tony Todd plays himself in an episode that revolves around him crashing at Adam and Joe’s, and he is simply the worst house guest a guy could want.  Seeing the funny side of Candyman was a treat.  But if you keep watching, there are appearances by Seth Green, who plays a crazy special effects artists the guys wish to have help with their film.  Ray Wise, Kane Hodder, and Danielle Harris also make appearances as well, and that’s not even everyone who pops in for some screen time.

Though there is a lot about the show I liked and enjoyed, there are still plenty of issues I have with it.  This is the show’s first season, so I don’t want to be too hard on it, but some of the comedy just wasn’t there for me.  The show is very self-aware, and seems to make fun of the typical sit-com clichés, yet at the same time it seems like it’s trying to be serious, and the shift of tone at times can be jarring.  But again, this is only six episodes, and with sit-coms it usually takes a few seasons to really find their rhythm.  The laugh track simply needs to go; if there was an audience present maybe it would work, but using the canned laughter and audience reactions takes away from the moments that would have worked better had the track not been there.

Holliston is presented in its original aspect ratio of 1.78:1.  The 1080p image is arrived at with an AVC MPEG 4 codec.  Considering this is a sit-com, viewers are not going to be treated to the finest imagery that cinema has to offer.  Instead we are given over-lit shots that give us a flat look and not much detail or definition.  Most of the gore effects look cheesy because of this, but it helps add to the aesthetic of the show.

The DTS-HD Master audio 5.1 track for Holliston is what you would expect from your typical sit-com. The dialog is clear enough, as is the music track that is mainly only used for the few scenes to build some atmosphere or for scenes when key characters enter or exit a scene.  The laugh track is a bit off-putting, but this is intentional and at times has a funny bit with an audience member making an obnoxious comment or being played to accentuate an overly dramatic moment.

Audio Commentaries: Each of the six episodes comes with a commentary by the cast and crew members.  This is my favorite feature to the disc.  All the behind-the-scenes stories about the making of the show or why certain bits made it in or were cut made it informative in an entertaining way.  Green and Lynch do control most of the commentaries, which isn’t such a bad thing, because the guys do have a lot to offer up in a short amount of time.  When the girls manage to get a word in, they are equally as amusing and informative.  Some of the better commentaries I’ve gotten to listen to in a while.

Bloopers: (5:30) Your standard blooper reel cut together with some mildly amusing bits.  My favorite of these involved Oderus eating popcorn during one of the scenes.

Deleted Scenes: Three deleted scenes, from over the span of the first season.  Each comes with an introduction with Adam and Laura.  One of the scenes is an uncut, long shot of the “infamous” gum scene. There is an alternate ending for the “pilot” episode where Adam and Corri end up back together.  The third and final deleted scene is an alternative opening for episode 5 where we see Adam and Joe argue over a game being saved over.

The Road to Holliston Promos: A collection of little promos to help promote the release of Holliston on Fear Net.  My favorite of the bunch is “network notes” where Adam and Joe have to sit and take notes on the show from a producer’s 11-year-old daughter.  What’s not so good, the 9-minute audition we see for Corri English.  Could have been cut down to 5 minutes easily.

Sneak Peak: (19:51) A Fear Net interview with the cast and crew of Holliston to get fans excited about the show.

Behind the Scenes: A brief, 7-segment look about the origin and making of Holliston.  I expected a little more here, but for the fans of the show they’ll have a good time with this.  If you’re looking for any big juicy reveals or back stories, you’re better off listening to the commentaries.

Over all I think Green and the gang are off to a decent start.  I’m looking forward to the next season and seeing where these characters go, but if it’s more of the same, I may simply just tune it out and stick with The Big Bang Theory.

Brent Lorentson is a horror writer and film critic based out of Tampa, Florida. With a BA in Digital Film, he co-wrote and co-directed Scavenger Hunt. His short stories have appeared in various horror anthologies. In 2019 his short script Fertile Blood will be a part of the anthology horror film Slumber Party. He is currently working on his first novel A Dark and Secret Place set to be released in late 2019. Favorite Films: Taxi Driver, Fight Club, I Saw the Devil, The Wild Bunch, Dawn of the Dead, A Clockwork Orange, Pulp Fiction, Heathers, The Monster Squad, and High Fidelity.
“31 Nights Of Terror” After Dusk They Come Madagascar 3: Europe’s Most Wanted (Blu-ray)