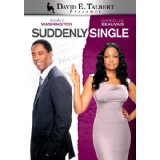 Started off rocky but pulled it together in the end. That’s my assessment of Suddenly Single, the latest play from established playwright David E. Talbert. Plays are a difficult field to be successful in, as an actor as well as a director; much more challenging than making a film. With a film, thousands if not millions of dollars are spent creating several different detailed environments to better illustrated the fictional world in which the characters live. With a play however, you get one set, and you have to tell an entire story within the confines of that one set.

Play productions of this day and age are also hampered by a rigid and predictable storyline that many must follow; A good individual is wronged by someone, usually a loved one, and suddenly down on their luck. The person wallows in self-pity briefly but usually with the help of friends or family, gains a clear perspective on their former life and realizes that it wasn’t as perfect as it had seemed. Eventually, this person rises above their circumstance and overcomes adversity and the story comes full circle with the person that wronged them usually suffering some karmic payback of some kind .That’s the storyline but in recent years, it has become less about the story and more about the journey. Much of that in no small portion is owed to the newly crowned king of playwrights, Tyler Perry. The downside to that is many new plays run the risk of instantly being compared to Perry’s work, many of which simply not being up to the task. David E. Talbert however, is.

An accomplished playwright in his own right with thirteen plays (fourteen now with the addition of Suddenly Single) under his belt including awarding winning plays The Fabric of a Man and Love in the nick of Tyme. Talbert is recognized as, “One of the most prolific theatre makers in America,” by the San Francisco Examiner.

Suddenly Single tells the story of Samantha Stone (Garcelle Beauvais, The Jamie Foxx Show), wife and mother whose whole world is turned upside down when her husband of seventeen years Sylvester (Isaiah Washington, Grey’s Anatomy), announces that he is leaving her for another woman. Devastated, Samantha sinks into a weeks long depression unable to process the demise of her marriage. During her time of struggling, her best friend tries to aid in her transition into single life while her meddling mother tries to persuade her to attempt to reconcile with Sylvester. Eventually, Samantha finds the strength to start living again for her own sake as well as for her son’s sake.

The play explores several themes such as rebuilding your life after crippling loss as well as the double standard that exist between men and women. Garcelle gives an extremely committed and convincing performance while her co-star Washington’s seems unnatural and forced in comparison. Her best friend Cat, played by Brely Evans (Sparkle) in the beginning was portrayed overly dramatic but towards the end, Evans reined it in and settled well into the role of the supportive friend. Overall the production was very comical however misdelivery of several lines cost few laughs. More important than the comedy was the underlining message of the play which was clear and conveyed properly.

Jeremy Butler is a film school graduate of the International Academy of Design and Technology. He is been writing for Upcomingdiscs since 2012; however, movies have played a big part of his life for much longer. Favorite genres include horror, science fiction/fantasy, and comedy. Favorite movies are V for Vendetta, Boondocks Saints, Kiss Kiss Bang Bang, and The Godfather.
Budz House Wall Street (Filmmakers Signature Series) (Blu-ray)