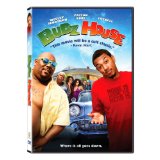 “This movie will be a cult classic.” –Kevin Hart

That’s the quote on the front of the Budz House DVD cover. Well, I never thought I’d see the day that I’d be willing to disagree with Kevin Hart, but here it is. I was hoping that my first official review for this site would be a positive one, but sadly that is not the case. I try to go into every movie without expectations; however, when I picked up Budz House I couldn’t stop myself. I’ve seen Wesley Jonathan in other projects, most notably the basketball drama, Crossover, where he gave a rock-solid performance. Faison Love has a reputation for gracing films with his special brand of comedy. However, when it comes to Budz House, I found very little to make it worth the time spent watching it.

The film revolves around Bud Howard (Jonathan), your predictable pothead with big dreams and little drive to make them come true. Comedian Luenell plays Bud’s mother who in true stereotypical fashion threatens to throw him out of the house if he doesn’t get a job and start contributing to the household. Bud, however, along with his friends (all of whom have ridiculous names such as Ooley and JPeezy) is more concerned with where his next high will be coming from.

Bud gets into trouble when Ooley rips off a major supply of weed from his cousin, local gang leader Big Happy. Bud and his friends are desperate to pay back the already diminished supply. Salvation comes in the form of a plumbing mishap that gifts them with a supply of their own. In order to pay back Big Happy, they decide to go into business for themselves. Their ever growing clientele attracts the attention of neighborhood beauty, Gigi, and drug kingpin One Punch. (Seriously, who came up with these names?).

Jumping right in, it is obvious that Budz House is intended to follow in the footsteps of films like Friday and How High, the evidence being that members of the supporting cast of both movies make appearances in this film. Regardless, their presence does little to help, as the entire movie is bombarded with things that damage the overall quality of the movie. There was essentially no chemistry between any of the cast with exception of maybe Bud and his mother. Gigi, who was supposed to be the object of desire, but came off more like she suffered from psychological issues. Bud’s inner circle was meant to act as comic relief, but their jokes either require you to be high or were just not funny to begin with. Also on several occasions, the movie cut away from the principal plot to tell a side story the movie could have simply done without. Finally, the movie ends in such a comical fashion that you may find yourself laughing, but from its illogicalness rather than a place of humor.

Which is not to say that the movie doesn’t have a few redeeming qualities; Luenell is good for a few short laughs, and Bud implores the breaking the fourth wall narration style instead of the standard voice-over (although it is done so much that it starts to become more annoying than entertaining).

In conclusion, there are some films that you see and you just know that you will remember them

Jeremy Butler is a film school graduate of the International Academy of Design and Technology. He is been writing for Upcomingdiscs since 2012; however, movies have played a big part of his life for much longer. Favorite genres include horror, science fiction/fantasy, and comedy. Favorite movies are V for Vendetta, Boondocks Saints, Kiss Kiss Bang Bang, and The Godfather.
“31 Nights of Terror” Spongebob Squarepants – Ghouls Fools Suddenly Single