Posted in: No Huddle by Jeremy Butler on November 13th, 2012 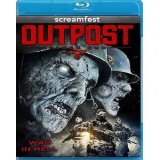 Think 28 days later set in 1945 with Nazis, or at least that was my first interpretation of Outpost: Black Sun. Considering how relatable it seems to that film, and being a huge fan of the Danny Boyle series, I really wanted to like Outpost. In reality, however, it took multiple viewings of the beginning for me to grasp the plot of the movie. Now I believe myself to by a fairly intelligent guy, so the idea of having to watch the beginning of a film more than once to comprehend the plot is enough to make me write a movie off. However, once I made it out of my cloud of confusion, something happened…it got interesting.

The story starts off with the introduction of Lena (Catherine Steadman, The Tudors), daughter of holocaust survivors who after the death of her father, picks up his mantle of hunting down Nazi war criminals, specifically the ones who ran the concentration camp her parents were housed in. After tracking down the second to last war criminal on her list, she learns that not only is her final target well hidden, but he has created something that has the potential to help the Third Reich accomplish world domination.

Traveling to her final target Klausner’s last known location, Lena encounters someone from her past, Wallace (Richard Coyle, Prince of Persia), a hardened engineer who had past dealings with her family. Wallace happens to be following the same trail as Lena except, his goal is to destroy Klausner’s latest creation, a machine that not only reanimates the dead but makes them indestructible inside the magnetic field it creates. Though he tries to discourage Lena from going forward, Wallace teams up with her to find Klausner and the machine. Not long after they begin their journey, they join up with a group of soldiers who are under orders to locate the machine within a limited window of opportunity or face nuclear consequences.

Imagine my surprise when I learned that this film was actually a sequel, or rather I guess it would be considered a prequel (although I wouldn’t have known that if I hadn’t done my homework, considering that both the DVD disc and the film’s menu mention nothing about this being the second). The first starred Ray Stevenson (Punisher: War Zone), he is not featured in the second, which is not surprising considering the time difference between the two films.

Since I never saw the original film, I possess a unique objectivity, since what I see will not be hampered by knowledge of the previous installment. What I see is a film that makes a good prequel and would do just as well as a stand-alone film. Richard Coyle and Catherine Steadman are interesting and complex leads although both their back stories are vague. It would have been beneficial if that aspect was explored but it is not too detrimental to the overall story. The film has a good pace to it, and I must admit that the twist at the end really threw me for a loop (haven’t been surprised like that since Lucky Number Slevin).

On to the specifics of the story. The film is supposed to be set in 1945 though this is never expressly stated; the only reason I am aware of that is from the research I did into the film. Granted the backdrop and some of the weaponry may infer that it is not modern day; however, those same things can be confused with the events of the movie taking place in a part of the country that not yet been modernized (also I’m not a gun expert, but I’m pretty sure that scope on one of the soldier’s rifles didn’t exist during the Nazi era).

As for the special effects, they are on par with a film of this genre. The zombies have more of a decayed look rather than pulsating sores and blood dripping from their lips; it’s a nice change-up from what you would now see on say The Walking Dead (that is not an indictment of the AMC series of which I am a fan).

In the area of cinematography and lighting my only complaint would be that the sunlight coming through the open door and windows in the opening scene is overblown, and it pulls focus away from everything else. That is the only instance when it is out of control; the rest of the film it is completely in check and the camera angles are excellent.

Ultimately, a worthwhile film even though it takes some time to build up to that. The twist at the end makes up for any other nuisances; I was completely caught off guard.

Jeremy Butler is a film school graduate of the International Academy of Design and Technology. He is been writing for Upcomingdiscs since 2012; however, movies have played a big part of his life for much longer. Favorite genres include horror, science fiction/fantasy, and comedy. Favorite movies are V for Vendetta, Boondocks Saints, Kiss Kiss Bang Bang, and The Godfather.
Aim High: The Complete First Season Nitro Circus The Movie