Posted in: No Huddle by Brent Lorentson on November 13th, 2012 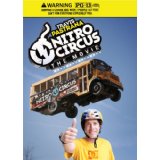 What do you get when you mix Jackass with stunt master Evil Knievel?  Well, you end up with the Nitro Circus.  This group of guys (and one girl) is made up from a variety of extreme sports athletes and guys that simply enjoy pushing the limits of safety and sanity all for the sake of the ultimate adrenaline rush.  Is this something that really needed to be a movie?  Does anyone really want to see grown men (and one woman) doing bike jumps 400 feet in the air?  Hell yeah we do!

I’m no stranger to these types of films.  One of my all time favorite movies to kick back and have a couple of drinks with is Stunt Rock.  Stunt Rock is the holy grail of stunt movies with a mix of glam rock.  What Grant Page (Stunt Rock) and Knievel did was pave the way for Johnny Knoxville, Bam Margera, and Travis Pastrana.

For those who think Jackass is a waste of time, no hard feelings, but Nitro Circus isn’t for you.  Is this a movie people will talk about for years to come? Not a chance.  But it’s still a good time filled with insane stunts you would never consider doing no matter how drunk you were.  From the start we see the gang of adrenaline junkies hop into a school bus just to jump 167 feet inside; sure, this is pointless, but it’s something a lot of us wish we could have had the chance to do.  And that’s what the movie does; it allows us to join these knuckleheads while they complete a series of insane stunts from the safety of our living rooms.

As for the plot, well, there really isn’t one.  The connecting thread seems to be watching the circus crew complete stunts while preparing for a big live show in Las Vegas in front of thousands of screaming fans.  Along the way we see a few interview segments with various members of the Nitro Circus crew, as well as members from Jackass, but the one interview subject that surprised me was Channing Tatum (yeah, the Magic Mike and G.I. Joe guy).  Everyone involved has plenty of nice things to say, and there is a lot of respect shown for these risk takers who are willing to risk life and limb for every stunt that they perform.

Because a lot of the stunts the team performs are illegal to attempt in the US, the team has to venture to other countries to get the footage needed to get the movie done.  One example involves them jumping from one building to the next, 65 stories up, using big wheels…yes those little three-wheeled toys kids use to ride around on.  Kudos to these guys going through with the jumps and surviving; if I were foolish enough to attempt these stunts I can’t imagine how many adult diapers I’d go through.

Not every stunt is a success, though, and when things go wrong, the serious danger these guys put themselves through is clear.  We see this most clearly when two of the members plan to jump a ramp inside a car, but the stunt goes horribly wrong and they have to be taken to the hospital.  Everyone immediately comes to the aid of their fallen members; we get to see the family bond they have developed for one another, and it’s in these moments the danger they are continuously in is made all the more apparent.

Over all this was a good time, better than I had expected actually.  Some might be tired of seeing man-children doing foolish things, but for me it’s a guilty pleasure to enjoy.  It doesn’t have the charm of Jackass (yeah, I just said that) but for fans of extreme sports and people doing stupid things, well, you get plenty of what you are hoping for.

Brent Lorentson is a horror writer and film critic based out of Tampa, Florida. With a BA in Digital Film, he co-wrote and co-directed Scavenger Hunt. His short stories have appeared in various horror anthologies. In 2019 his short script Fertile Blood will be a part of the anthology horror film Slumber Party. He is currently working on his first novel A Dark and Secret Place set to be released in late 2019. Favorite Films: Taxi Driver, Fight Club, I Saw the Devil, The Wild Bunch, Dawn of the Dead, A Clockwork Orange, Pulp Fiction, Heathers, The Monster Squad, and High Fidelity.
Outpost: Black Sun Snowmageddon (Blu-ray)