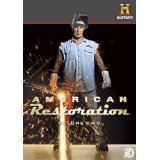 “Remember back in the day when things were made by hand and people took pride in their work? My name is Rick Dale, and I bring these things back to life.”

If you watch Pawn Stars on History, than Rick Dale really needs no introduction. From time to time the Pawn Stars guys get in something that they want to have restored to increase its value. For most of those projects they go to Rick and his team. Now Rick’s gotten his own spinoff series, and it’s set up very much like the other show, from the grunge guitar soundtrack to some of the same wheel-and-deal aspects. This is pretty much the same production setup, and it will appeal to the fans of Pawn Stars.

“Every restoration has its own set of challenges. There’s no owner’s manual for what we do. There’s no job that we can’t handle.”

Each episode begins with the introduction of some items that have been brought in for restoration. The owner gets on the camera and gives us all the sentimental reasons why they want the item restored. It very often involves a dear departed loved one. Then they get with Rick and start to talk about what needs to be done…and, of course, the cost. Rick does a pretty good job of selling the price, and there are few negotiations here. From that point the show takes us through the restoration process from disassembly to reassembly. Finally, we witness the unveiling of the restored item to the owner.

Just like at the Gold & Silver Pawn shop, this is a family business, for the most part. Rick is joined by his son Tyler whom he hopes to leave the business to someday. He also works with his brother Ron, who mostly does pick-ups. Then there’s Kowboy. No, that’s not a typo. That’s how he spells his name. He’s the beer-drinking tough guy. Kyle is the expert at putting things back together. And for all of you Chumley fans out there, these guys have Brettly. This is the guy these guys constantly make fun of, and the show often catches his ignorance and mistakes. He’s not near as charming as Chum, so I’m not sure why Rick would really keep this guy on staff.

There are certainly more than a few cool items that include several of those old kiddie rides that you used to see in front of grocery stores. You put in a quarter and they would shake. They were often in the shapes of cars and rockets. This release features one shaped like a boat and one where someone at one time put a real motorcycle body complete with engine on the ride. The staff pitches in and helps Brettly restore a truck he bought in bad shape. There are the usual assortment of vending machines and Coke coolers. One of the most unusual items was a peek show machine from the burlesque days. The guys end up going to Vegas’s Burlesque Museum for vintage film to put in the machine. The machine ends up sold to a collector who donates to the museum.

I’m amazed at how much money people actually spend in this economy to fix up what are usually essentially toys or decorations. People often spend literally thousands of dollars to restore trinkets. I’m curious if the network pitches in to help these folks pay for the work.

This is not a season set. The first season was only a few episodes long. This set gives you 16 episodes from the first two seasons on two discs just like the first release. It’s a cool collection “if you can get it at the right price.”

Gino Sassani is a member of the Southeastern Film Critic's Association (SEFCA). He is a film and television critic based in Tampa, Florida. He's also the Senior Editor here at Upcomingdiscs. Gino started reviewing films in the early 1990's as a segment of his local television show Focus. He's an award-winning recording artist for Omega Records. Gino is currently working on his 8th album Merchants & Mercenaries. Gino took over Upcomingdiscs Dec 1, 2008. He works out of a home theater he calls The Reel World. Favorite films: The Godfather, The Godfather Part II, The Body Snatcher (Val Lewton film with Karloff and Lugosi, not the pod people film), Unforgiven, Gladiator, The Lion King, Jaws, Son Of Frankenstein, The Good, The Bad And The Ugly, and Monsters, Inc.
We Can’t Go Home Again & Don’t Expect Too Much Brave (Ultimate Collector’s Edition) (Blu-ray 3D / Blu-ray)