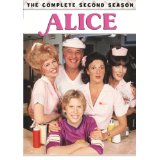 “Early to rise, early to bed. And in and between I cooked and cleaned and went out of my head.”

There was a new girl in town for the 1976 television season. Well, she wasn’t exactly new. The whole thing started out as a feature film called Alice Doesn’t Live Here Anymore starring Ellen Burstyn as the title character Alice Hyatt. The film was one of the first feature films directed by Martin Scorsese. Burstyn won the Oscar for her performance as Alice, and the film achieved a ton of critical acclaim and two years later a sit-com on CBS that lasted nine seasons. It took a long time, but the series has finally come to DVD thanks to Warner’s Classic Archive Collection series of manufactured-on-demand discs.

Alice (Lavin) is a New Jersey widow who decides she needs a new life. She packs up her 12-year-old son Tommy (McKeon) and drives to Phoenix. There she gets a job as a waitress at Mel’s Diner. The owner and cook is Mel Sharples (Tayback). There were two other waitresses working the diner as well. Flo (Holliday) was a loose southern belle with a sharp tongue and a new fella almost every night. Her famous line was “Kiss my grits” when she needed a snappy comeback. Then there was total opposite Vera (Howland). Vera was both as innocent and as dumb as they came. She was easily intimidated. As different as the girls were, they became close friends, and most of the episodes revolved around their relationship, often pulling each other out of a jam. The episodes also often focused on Alice’s attempts to raise a growing and ever curious adolescent without a father. They had little money and lived in a small one-bedroom apartment where Alice had to sleep on the sofa bed.

The film was quite a bit more serious and not the sit-com fodder one might have thought. Still, the series caught on, and it managed to last through many cast changes. Vic Tayback as Mel was the only actor to reprise his role from the film. The only other film member to show up was Diane Ladd who played Flo in the film. While she did not play Flo, she did play her replacement Belle for a year. Flo had gone on to an unsuccessful spin-off, and several characters came through Mel’s in an attempt to replace her. Only Linda Lavin and Beth Howland as Vera appeared in every episode, with Vic Tayback only missing two.

The show also featured a large number of oddball characters who were regulars to the diner. There were always jokes about how bad Mel’s cooking was, and in one episode of the first season everyone thought his chili had killed a famous food critic. But the regulars kept coming back, if only to flirt and talk with the girls.

Alice was an aspiring lounge singer who was always looking for her big break. Actress Linda Lavin even sang the show’s popular theme song. Several episodes featured the actress belting out a tune, usually in a misguided attempt to be discovered. The show might have been rather predictable, and they certainly brought out all of the usual sit-com standards. But the appeal often placed it as one of the highest-rated shows in its time slot. The characters were always lively enough, and the series stayed with more character-driven material.

The second season didn’t stray at all from the material or cast of the first. One of the standout episodes featured George Burns, who at the time had just starred in the comedy classic Oh God. He visits the diner as himself, but Vera believes everything she sees on television and in the movies is real. Naturally, she thinks George Burns is God and decides to leave Mel’s to serve him. It’s the best episode of the season and one of the best of the run of the series. Other episodes include Flo almost becoming the fourth wife in an Arab’s collection of wives. Sex discrimination rears its head when Mel hires a waiter and pays him more because he’s a man. A con artist tries to bilk Mel out of $200 by claiming to be a dying Indian and that Mel’s was built on his ancestral burial ground. Naturally, he’s come here to die…that is unless Mel’s willing to give him the money to go away. We also meet Flo’s flamboyant rodeo brother who takes quite a shine to Alice. Another episode has one of Tommy’s friends develop a serious crush on Alice.

Now with Warner Archive on the case there’s a chance you might be able to finish your collection of episodes. It’s even more promising that Warner followed the first season with the second so quickly. “She was just passing through, but if things work out she’s gonna stay awhile.”

Gino Sassani is a member of the Southeastern Film Critic's Association (SEFCA). He is a film and television critic based in Tampa, Florida. He's also the Senior Editor here at Upcomingdiscs. Gino started reviewing films in the early 1990's as a segment of his local television show Focus. He's an award-winning recording artist for Omega Records. Gino is currently working on his 8th album Merchants & Mercenaries. Gino took over Upcomingdiscs Dec 1, 2008. He works out of a home theater he calls The Reel World. Favorite films: The Godfather, The Godfather Part II, The Body Snatcher (Val Lewton film with Karloff and Lugosi, not the pod people film), Unforgiven, Gladiator, The Lion King, Jaws, Son Of Frankenstein, The Good, The Bad And The Ugly, and Monsters, Inc.
Brave (Ultimate Collector’s Edition) (Blu-ray 3D / Blu-ray) My Big Fat Greek Wedding (Blu-ray)